The Talparo Formation as used by Petrotrin is a biostratigraphic unit consisting of “Rotalia/Elphidium faunas with occasional beds of richer more varied assemblages with Nonion, Uvigerina and other calcareous forams. No markers are known to be confined to the formation. The base of the Talparo Formation was defined by the highest occurrence of Elphidium 15, towards the bottom, Miliammina telemaquensis may be found together with calcareous foraminifera. The top by the highest occurrence of certain small species of Rotalia (especially Rotalia 6), often having a distinctive brown preservation.
The Talparo Formation uncomformably overlies the Springvale (not visible on seismic, only in outcrop) and is divided into four members : 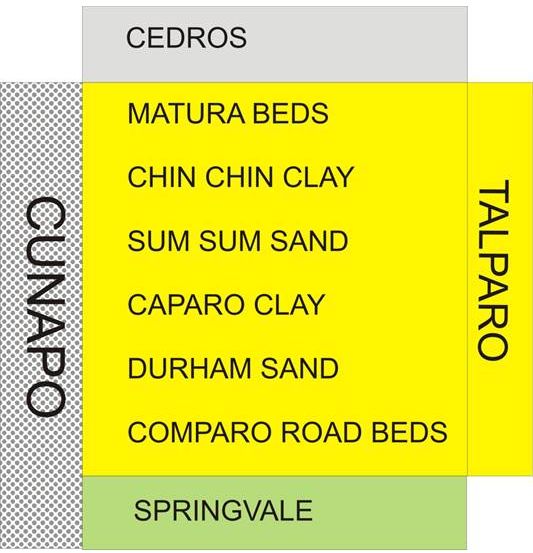 Chin Chin Clay
Sum Sum Sand – The Sum Sum traditionally been mapped as a single unit where no seismic exists, however there are two sands that can be mapped and have different geographic extents. The oldest or “lower” Sum Sum typically has a blocky log profile, in places there is a short fining upward top. This is the most laterally extensive unit. The second unit or “upper” Sum Sum extends from the Venezuelan border to the western 1/3 of the block where it disappears based on well data. These sands have been interpreted to have been deposited in a sw -ne trending estuary with tidally dominated sediments.
Generally consists of two sands in the North Soldado – North Marine area and can be correlated as far as Barrancones-1 using the ∆IVE pollen zone that is found at the base of the units
Caparo clay (including Matura beds) – The Caparo Clay Member is made up of light blue – pale grey claystones There are rare thin glauconitic sandy clays with molluscs. Claystones are light – dark grey, non very soluble, soft – occasionally firm – occasionally blocky, occasionally well compacted, non – slightly calcareous, occasionally carbonaceous. Siltstones are light medium grey – brown grey, moderately – well indurated, non calcareous. Limestone are white, tan, grey, blocky, hard brittle, micro – cryptocrystalline – massive, often abundant free calcite and fossil fragments. Sand s clear, tan, translucent, opaque, very fine grained – fine grained, moderately – well sorted, poor – moderately well consolidated, sub rounded – sub angular, occasionally sucrosic, generally loose, present as thin films ccasionally up to 50%. slightly calcareous and gypsiferous.
Durham Sand – The Durham can be sub-divided into two members a lower unit dominated by a sand with a blocky log character and an upper unit with thin sands with a spiky log character. The base of the blocky sand is considered to be the base of the Durham as in outcrop there is an erosional base with a coarse sand / pebble lag and claystone rip ups. Based on sedimentary structures it is interpreted to have been deposited in an estuarine setting.
According to Kugler (1996) there is an unconformity at the base of the Durham Sand Member, this has not been observed in the 3D seismic within the Gulf of Paria.
Sand are loose, clear, translucent, opaque, very fine grained – fine – medium grained, poor – moderately sorted, poorly consolidated, sub rounded – sub angular, occasionally sucrosic. (Gallai & Archie 2015)

Gallai, N & Archie, C., 2015, Stratigraphic units in the North Marine area: how are they defined and what is the nature of the contacts between them? Abstracts 20th Caribbean Geological Conference.

Archie, C. , 2017, THE SUM SUM MEMBER OF THE TALPARO FORMATION , USING OUTCROPS, WELL LOG AND SEISMIC DATA TO CHARACTERISE THE DEPOSITIONAL ENVIRONMENT AND DISTRIBUTION OF A GAS RESERVOIR