Author of name: MACREADY (G. A.) (1921). Petroleum In¬dustry of Trinidad. Trans. Amer. Inst. Min. Eng., vol. 65, p. 64.
Type locality: Boreholes in the Cruse oilfield at Guapo, 2 1/2 miles south of Pitch Lake.
Thickness: Up to 2 500 feet.
MACREADY recognises a 40 foot sand (Cruse oil zone) over— lain by 600 feet of Cruse shale with occasional lenses of sand. Above the Cruse shale follow 500 feet of alternating sands and shales called Stollmeyer oil zone separated from the overlying Forest clay by an unconformity. The entire group of beds is given an Eocene or Oligocene age. The 40 foot Cruse sand is claimed to rest on Naparima clay which is known to be a persistant horizon over a large area and to occur 1 000 to 1 200 feet below the top of the Stollmeyer Oil Zone. Although the term Cruse has been retained, its stratigraphic meaning has changed over the years.
WARING (1926, pp. 59 and 62) considers his Cruse shale, to be a silty clay and sand facies of his Green Clay of the Naparima area. The top of the Cruse clay is represented by the E-Sand (40 foot Cruse sand of MACREADY) and the bottom by the 4 G-Sand. The total thickness of Cruse is 1 000 feet in the Forest Reserve area. The Cruse clay is covered by the Forest (Lot One) clay and sands which WARING correlates with his Red weathering Clay) and include MACREADY’S Cruse Clay, Stollmeyer Oil Zone) and Forest Clay.
LIDDLE (1928, p. 471) attributes a thickness of 350 feet to the Cruse oil zone (Sand G) and places it at the base of the Forest formation.
SUTER’s (1951, p. 208) summary represents the accepted present usage of the term Cruse Formation: The thickness varies and may exceed 2500 feet. The lower boundary is transitional to Lengua (Green Clay of WARING), while the upper boundary is locally strongly unconformable to Forest. The Lower Cruse is dominantly cIayey, the middle and upper parts are sandy. Individual sand layers may be over 100 feet thick The Lower Cruse clays can now be identified on the basis of foraminifera all over South Trinidad. Characteristic foraminifera are: Discamminoides tobleri, Guppyella miocenica and Alveovalvulina suteri BRONNIMANN, 1951). H G. KUGLER).

Archie, C., 2004 , The identification of the depositional environments of the Cruse, Forest and Morne L’Enfer Formations in the southern half of the Gulf of Paria, Trinidad, West Indies, Abstracts AAPG annual meeting, Dallas, TX

Archie, C., Lakhan, C. & Gallai, N. 2016, Use of biostratigraphy and 3D seismic data to reinterpret depositional environments of the Lower cruse in the Southern Basin of Trinidad

Archie, C., 2019, Field trip to examine outcrops of the Cruse Formation between Palmiste Point and the Quinam Beach Facility 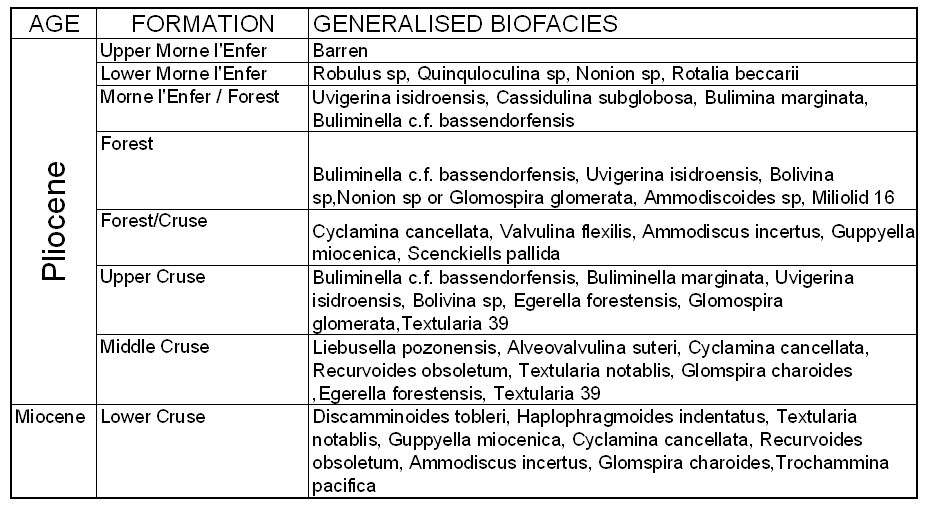 Foraminiferal assemblages used to identify the Morne L’Enfer, Forest and Cruse Formations and their bathymetries.