Three items or combinations of these items must be present for mud volcanism to occur:

2.Compressive forces due to tectonic activity

Overpressured claystone intervals – With the arrival of the Orinoco Delta in Trinidad around 5.5 million years ago, between 20,000 – 40,000 feet of sediments were rapidly deposited. Much of these early sediments were clay rich and were rapidly buried by other sands and clays. This rapid burial resulted in the water trapped in the pore spaces of sediments being unable to escape, as these sediments are buried deeper and deeper, the pressure of the trapped water builds as overpressure.

These over pressured muds behaves more like a low-viscosity magma,  its active rise is facilitated by hydrofracturing and can inject structural or stratigraphic interfaces and weaken the surrounding strata.

Kerr et al 1970 analysed mud from the Palo Seco and Moruga Bouffe and compared them with Lower Cruse samples. The clays from the mud volcanoes are predominantly mixed layer illite – montmorillonite and kaolinite, in the L. Cruse illite forms the larger part of the mixed-layer clay. Formation samples contain 55-69 % <2µ material, while mud volcano samples contain 33 – 44% due to mixing with silt and fine sand.

Other samples from Devil’s Woodyard, Piparo and Digity ranged from 19 – 66% clay (Yassir 1989). All clay samples when water saturated, become thixotropic with the capacity to flow as a liquid.

Thixotropic clays when saturated with water becomes a highly mobile fluid with great transporting power. This explains the presence of large boulders in some mud flows.

Compressive forces due to tectonic activity – Trinidad lies at the intersection of the Caribbean and South American plates, as a result it has been exposed to multiple phases of tectonic deformation starting from about 10.5 million years ago to the present.  The compression and transpression due to plate movements created many folds that currently make up the Central Range and the Southern Range, as wells as major faults. No mud volcanoes are found north of the Central Range as faults are mainly extensional / transtensional.

Mud volcanoes will develop either along networks of hydraulic fractures of fracture zones associated with thrust faults (Deville et al 2005). Most of the mud volcanoes are found either near the crests of anticlines or close to major thrust faults.

Most of the mud volcanoes in the onshore are found either near the crests of anticlines or close to major thrust faults. When contraction of the rocks takes place due to thrusting, localized overpressuring takes place and fluids (water, oil and gas) are injected through overlying rocks and faults producing mud volcanoes. 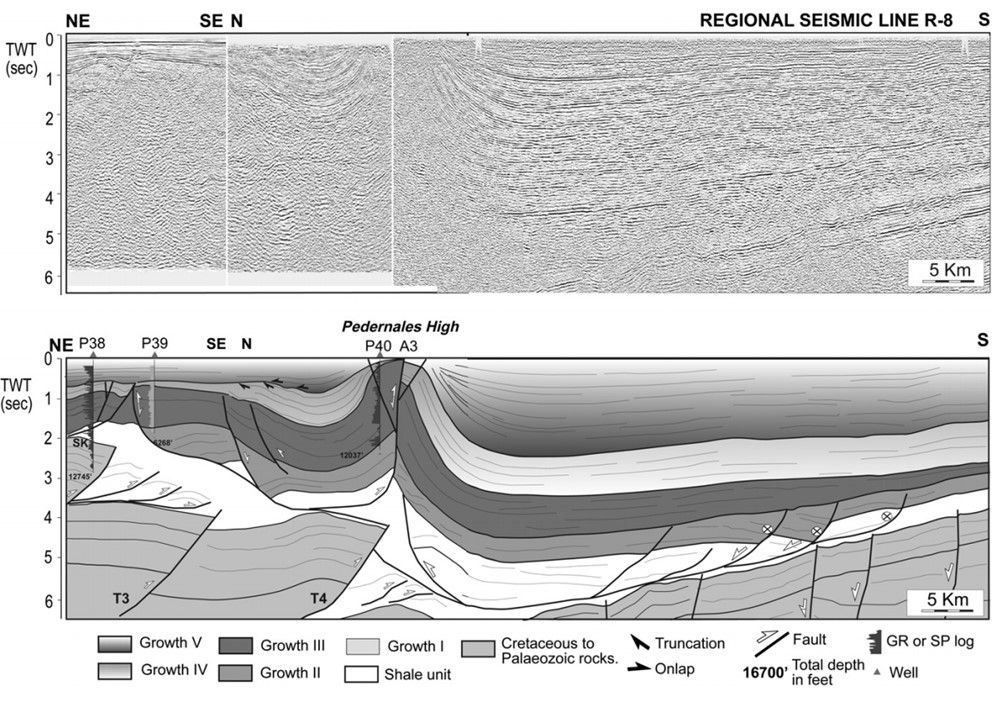 Seismic line and interpretation through the Gulf of Paria and the Pedernales Area to show the structure of the continuation of the Southern Range in Venezuela. Mud volcanoes occur at the crest of the  fold.  Duerto & McClay (2008)

Hydrocarbon generation and migration – More than 2 billion barrels of oil and 20 Tcf of gas have been produced from in the onshore and offshore Trinidad area. Generation of this oil and gas took place and continues today, anywhere between 13,000 – 18,000’ below sea level. Hydrocarbons being lighter than the surrounding source rock from which it was generated, migrates upward using fractures and faults in the rock.

Gas generation and migration may be one of the greatest contributors to mud volcano eruptions. It will do so by lowering the density of fluids and thixotropic clays, also when gas is trapped in shallow sands under the mud volcano, pressure will build until it fractures the overlying sediments and escapes as an eruption. Eruptions off the south coast in 1911 resulted in fires that could be seen from Port of Spain.

Most mud volcanoes constantly emit gas, being most visible in areas that have large mud pools such as Lagon Bouffe, Erin Bouffe and L’Eau Michele. Deville et al 2009 estimated discharges were higher than 10m3 / minute.

The following items or combinations of these items are expelled from mud volcanoes:

2.Mud (clays and fine particles) and clasts of different lithologies 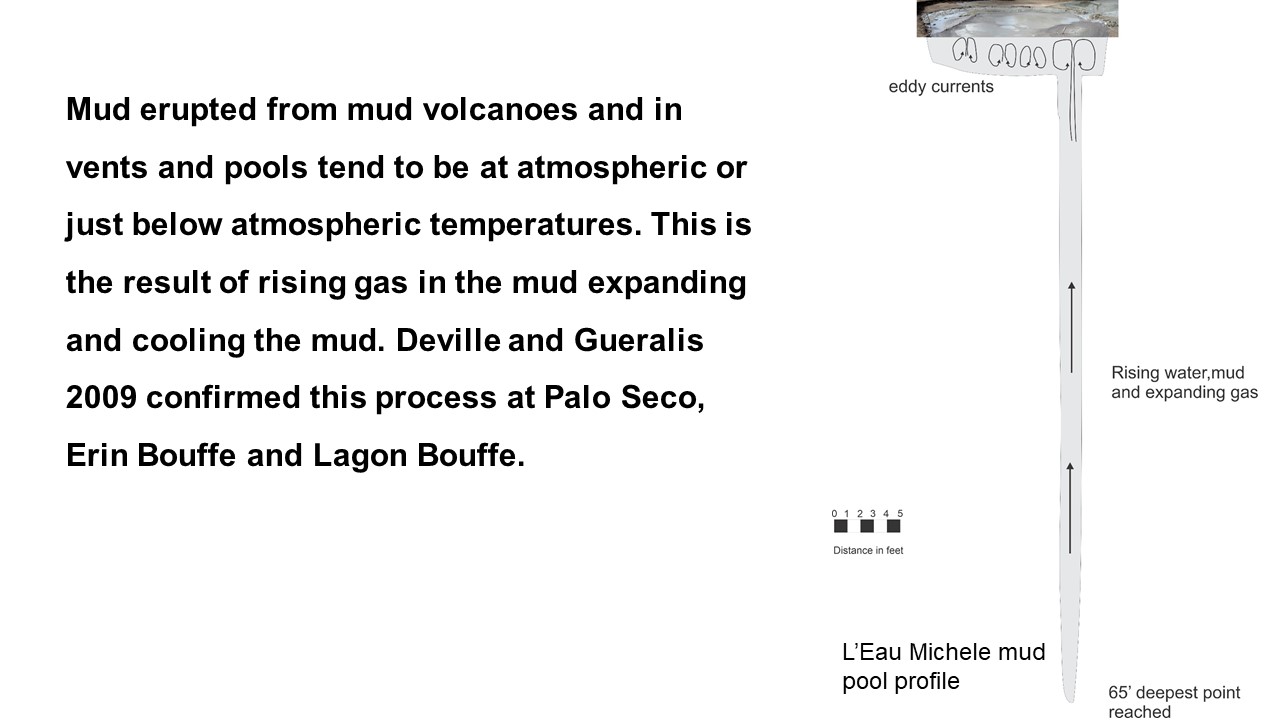 The gasses burn with a yellow to orange, smokeless  flame. Generally odourless.

Battani et al (2010) C13 values indicate that the gas is thermogenic in origin, the high methane content is due to separation during migration.

Analysis of noble gas radiogenic isotopes ( 40Ar*/20Ne vs 4He/20Ne) has shown that the residence time is shorter for the gas expelled by the mud volcanoes than for gas present in producing fields. Thus gas expelled is not from fields but from deep kitchens.

Analysis by Dia et al 1999 revealed that the unique methane content, large positive O18 shifts, as well as Boron, Lithium and Barium contents reveal that the fluids originated at depths greater than 3km. These fluids (originally sea water) as they rise mix with less deep reservoirs and meteoric waters this suggests a recharge mechanism that contributes to mud expulsion.

Two types of mud volcano activity are seen in the onshore of Trinidad: 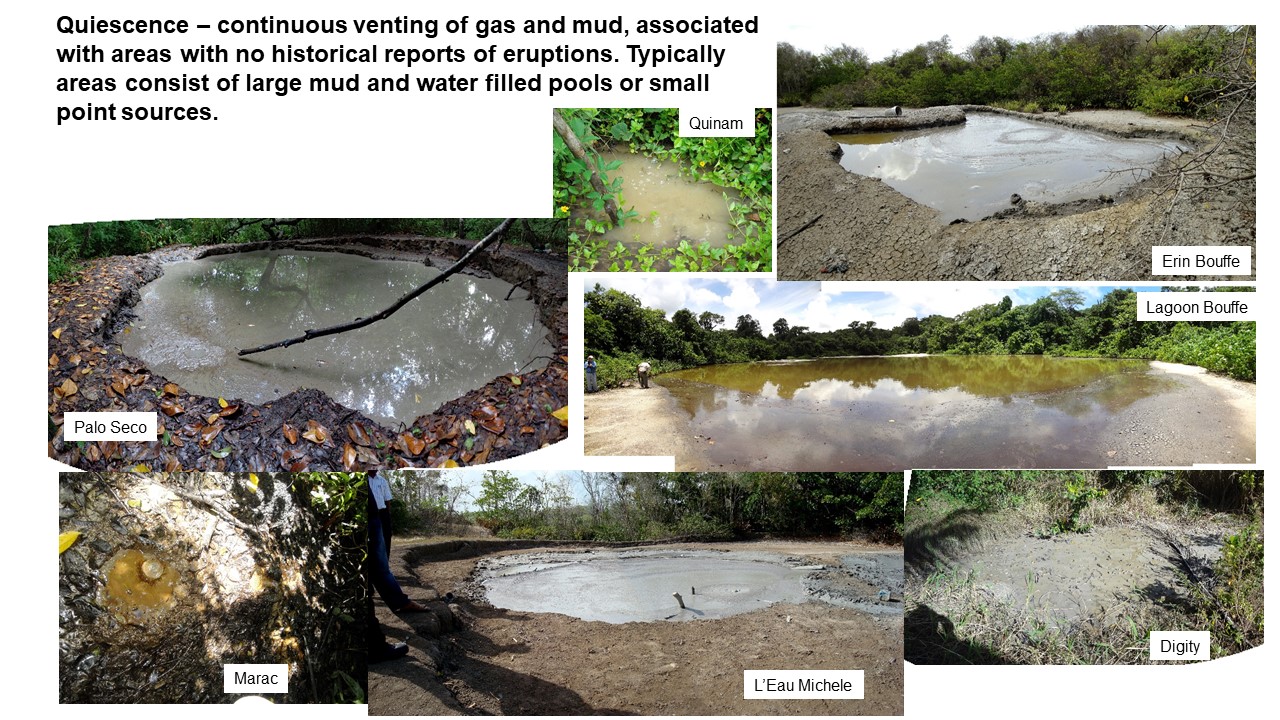 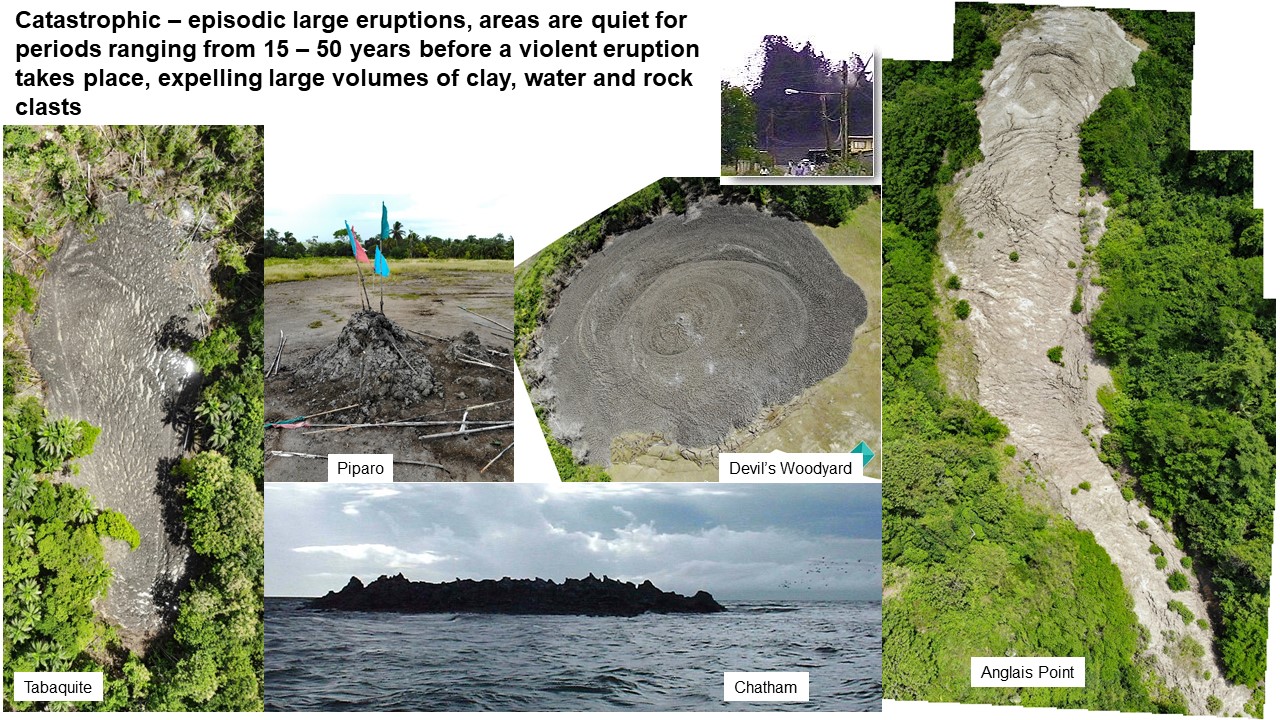 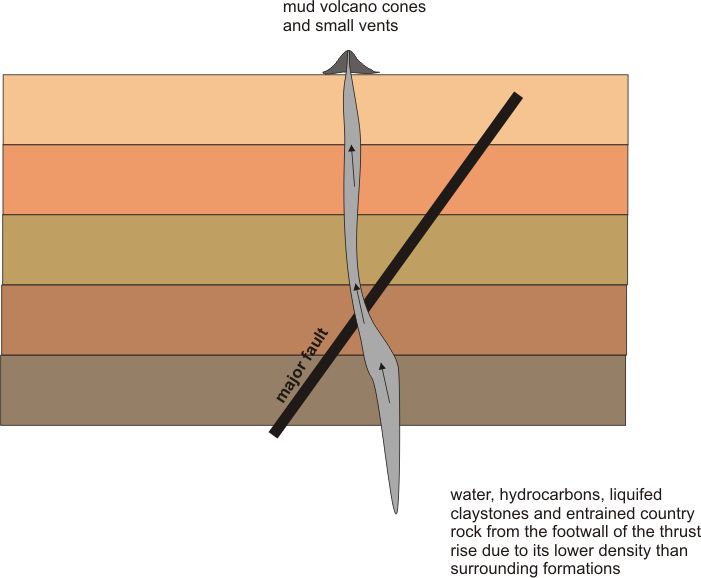 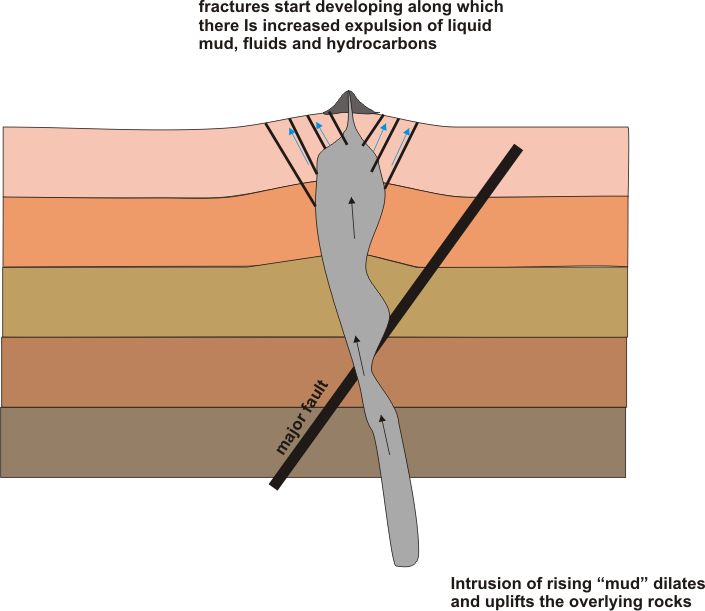 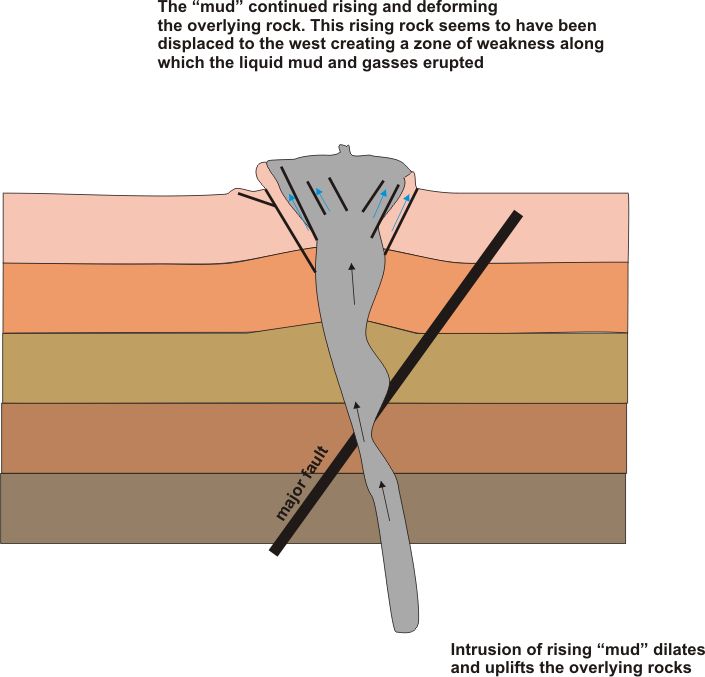 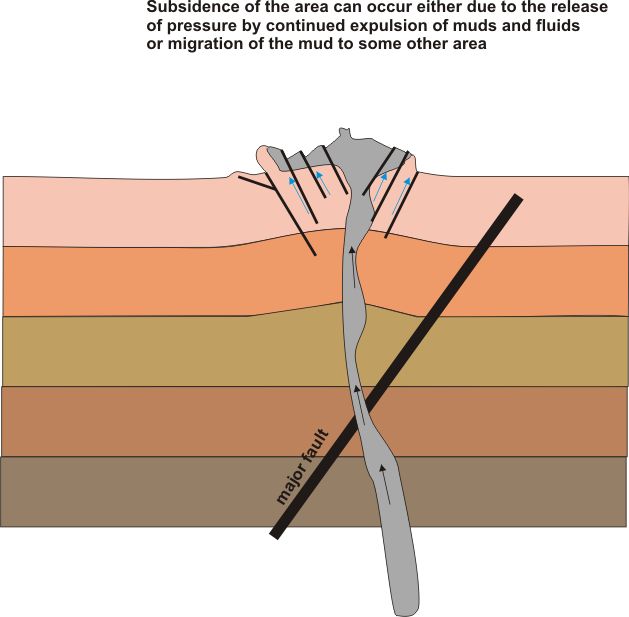 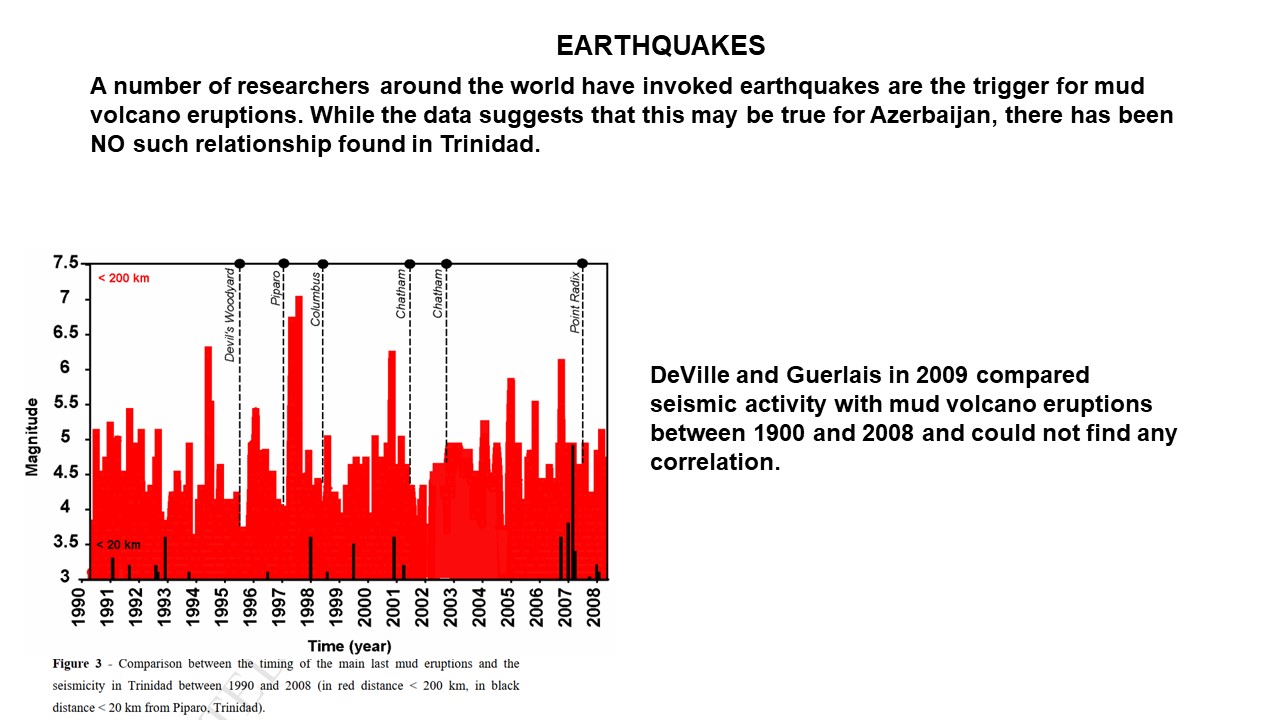 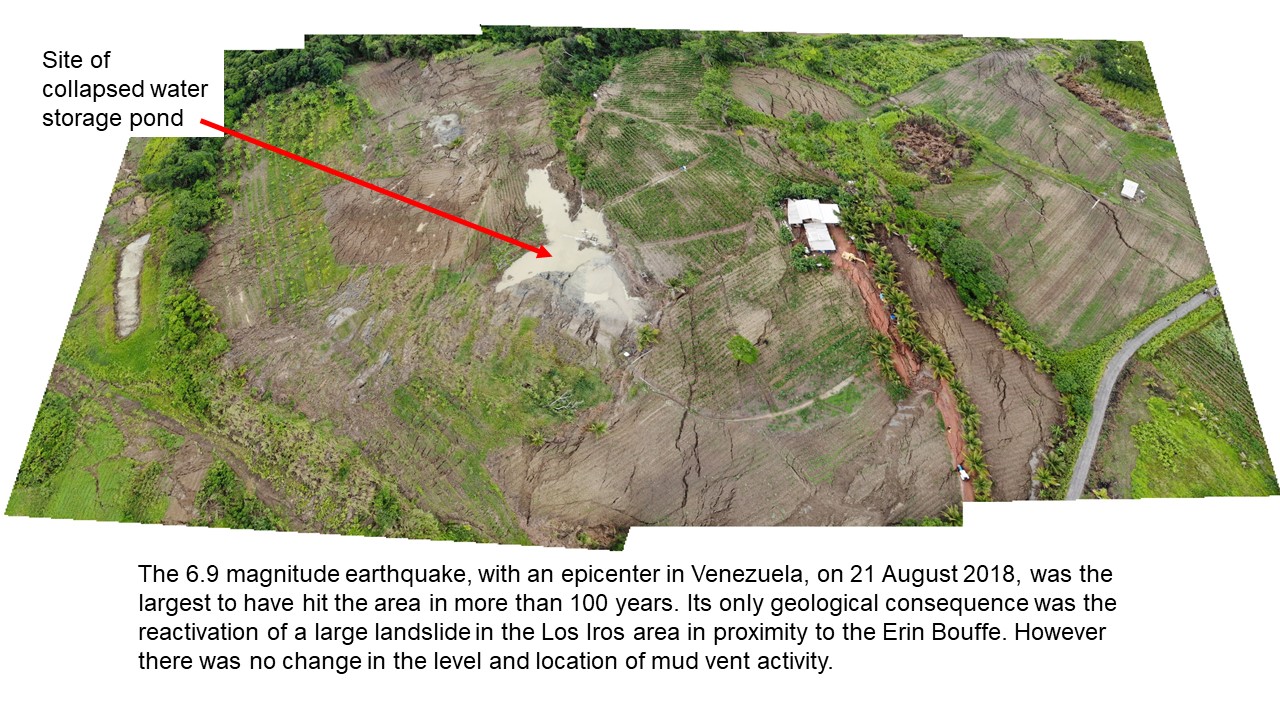 HOW OFTEN DO ERUPTIONS OCCUR? 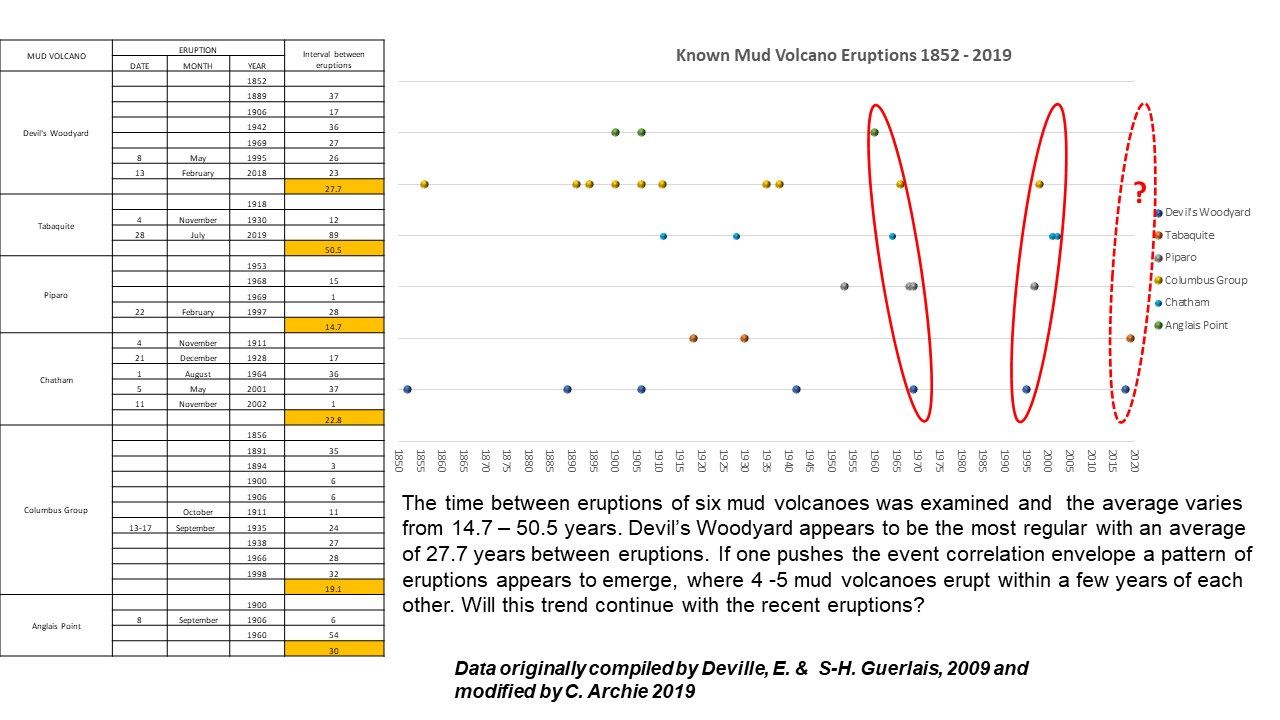