THE SUM SUM MEMBER OF THE TALPARO FORMATION , A REGIONAL PERSPECTIVE FROM OUTCROPS
CURTIS ARCHIE 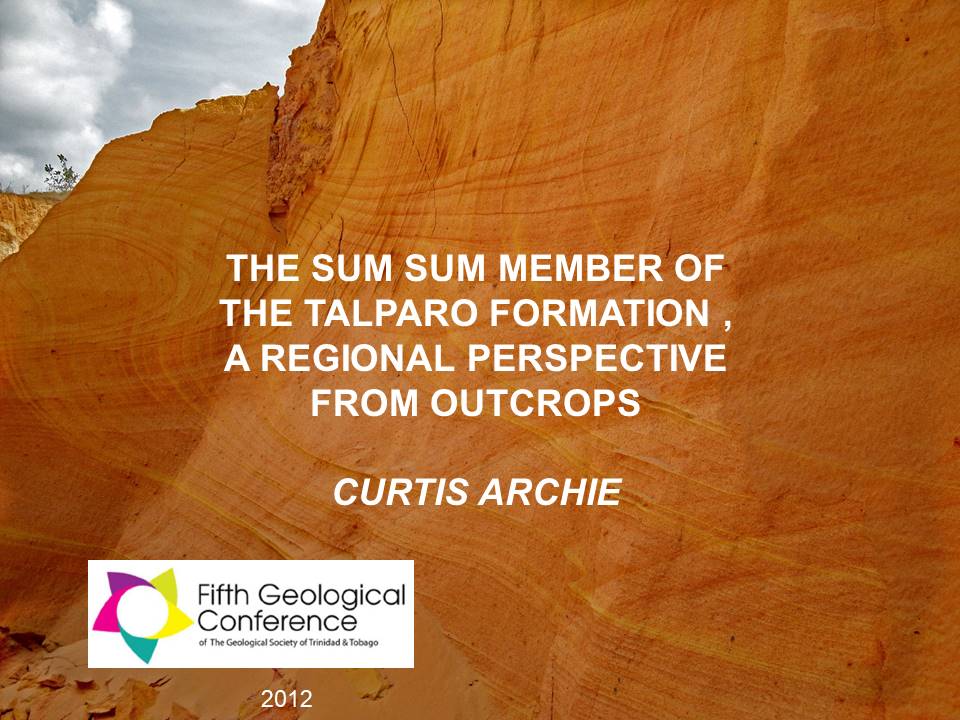 The Talparo Formation of Pleistocene age is about 4,000’ thick and comprises six members, two of which (the Durham and Sum Sum) have well developed sand units . The Sum Sum is the most important economically, in the onshore as a freshwater source and in the offshore as a gas reservoir. A number of quarries along the outcrop in western Trinidad offers one an opportunity to examine long strike sections from the top of the sand to the underlying Caparo clay member. These outcrops have been used to suggest a depositional environment for the unit, paleogeography and possible link to Pleistocene sea level changes.
The Talparo Formation is subdivided into six members (Fig. 1), the oldest the Comparo Road Beds is estimated from outcrop to be 3,500’. It is dominated by claystones and capped by a thin fossiliferous sand (5-20’ thick). The Durham Sand Member comes next, in places it has an unconformable contact with the Springvale Formation. The Caparo Clay Member is thought to be 2,600’ and is a blue grey clay with rare very thin sands some with glauconite and molluscs. The Sum Sum Sand member varies in thickness between 160’and 300’ and is overlain by the Chin Chin Clay Member which attains a thickness of 1,000’ and is a blue grey clay with rare sands. The youngest unit is the Matura Sand and Clay Member that is dominated by bivalves and gastropods. 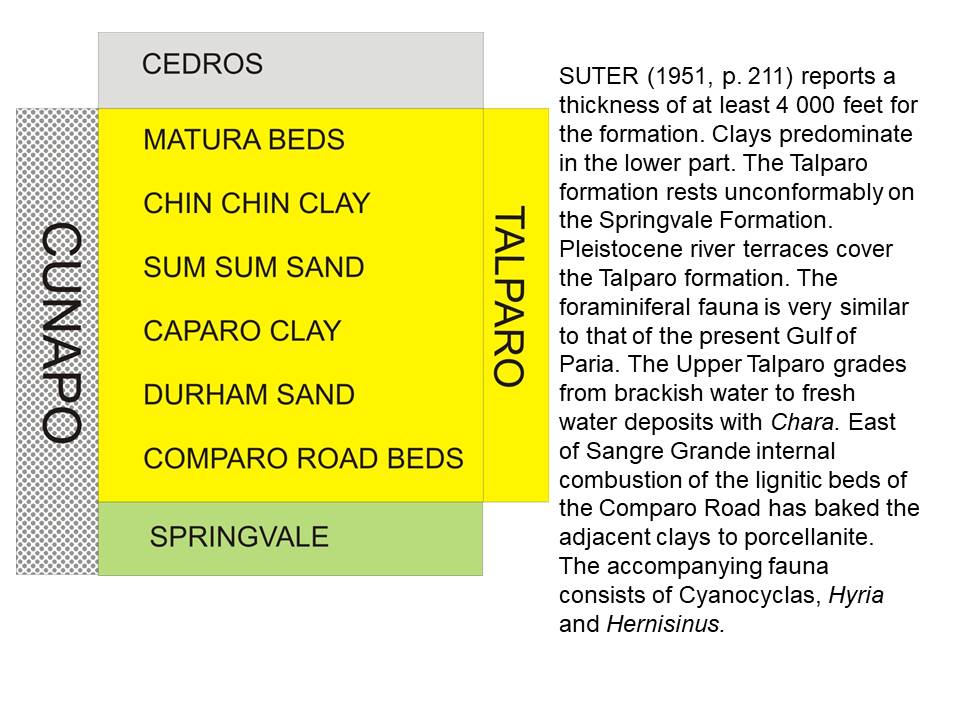 The Sum Sum Sand in the onshore outcrops in a narrow band (Fig. 2) trending SW – NE and has been encountered in the subsurface by many exploration wells both in the onshore and offshore. These sands are economically important as a major source of fresh water, the outcrops are an important recharge point for this sand. Fresh water has been encountered in wells as far as the middle of the Gulf of Paria. One sand is seen both in outcrop and wells in the onshore while in the North Soldado and North Marine areas in the Gulf of Paria two sands area encountered.
Six outcrops at active and abandoned quarries will be examined along strike and the rocks described to build a depositional story.
The outcrop at Maccaulay (Fig. 3-4) lies very close to what has been mapped as an unconformable contact with the Manzanilla Formation. There are a number of small channels eroding into each other , visible are lateral migrating sand beds separated by thin claystones and siltstones, some channels are lined with claystone ripup clasts at their bases. Some channels are entirely claystone filled, no bioturbation is seen in the outcrop and the grain are dominantly quartz with size and sorting fairly uniform. 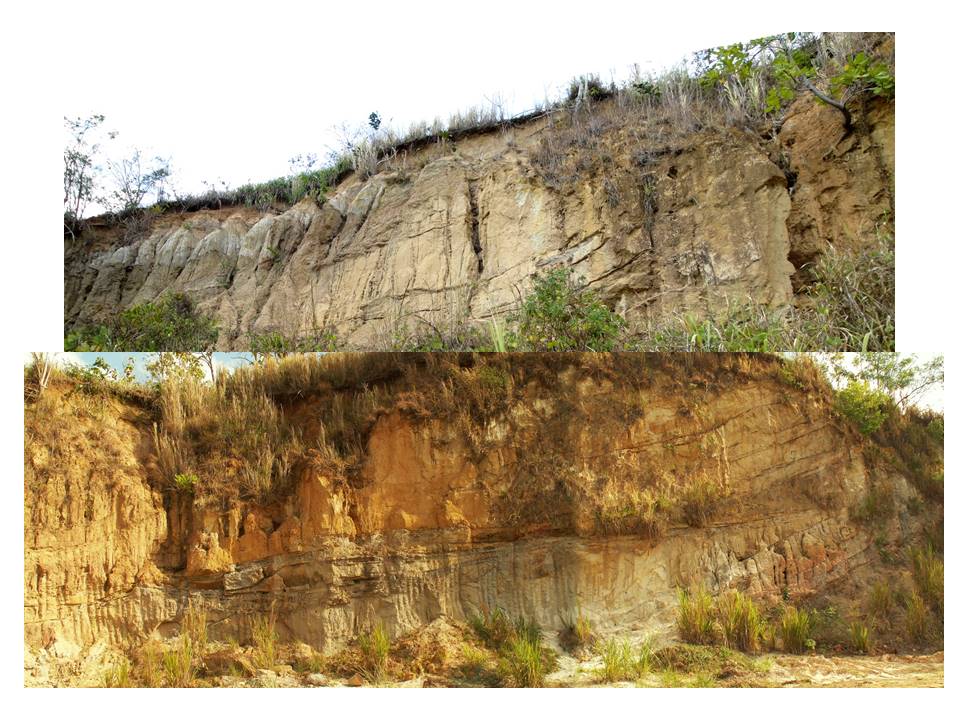 At the North Soledad Road quarry the outcrop runs north – south (Fig. 5)and the sand has been almost completely removed down to the basal clays. Long (< 300’) strike views are available of the outcrop (Fig 5-6), a face about 100’high is visible, sand makes up > 95% of the rock, thin (< 1’) laterally continuous claystones and siltstones separate sand beds ranging from 3’ – 10’. At contact between the Sum Sum sand and underlying clays. The clay is blue grey, fractured iron and sulphur stained along the fractures, This suggests that the clays may have a high pyrite content, and probably deposited in an anoxic environment. 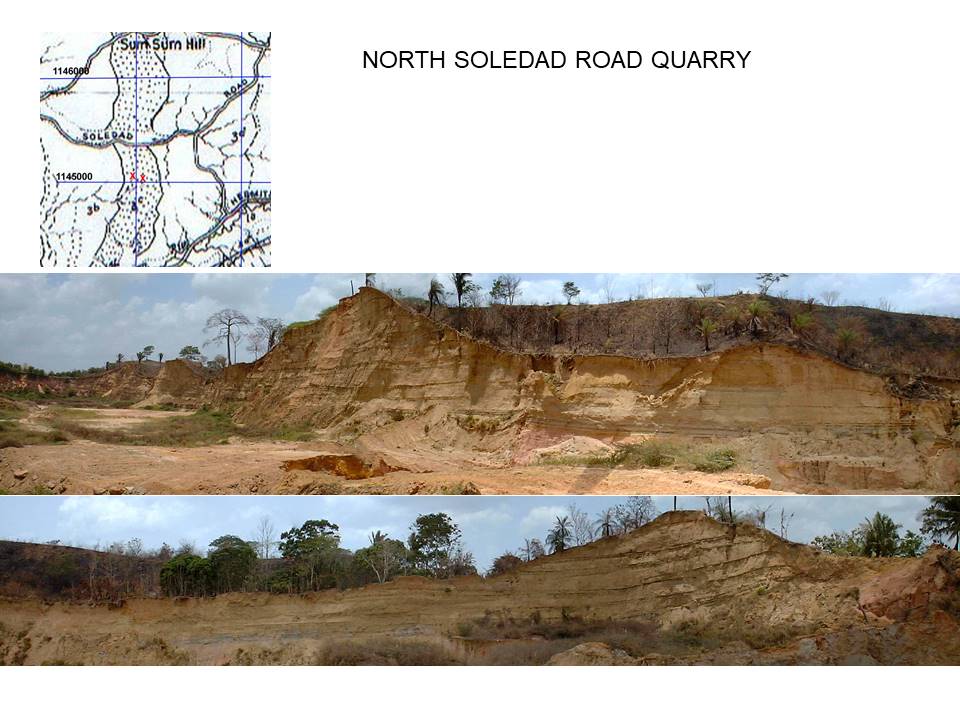 Abundant Thallasanoides burrows (Fig 7) are present in clays but become less common and disappear before a iron stained hardpan separating the claystones and sand. Large horizontal burrows are present on the hard pan (Fig. 8) together with groove marks and flute casts (fig. 9) that indicate a current direction towards the NE. 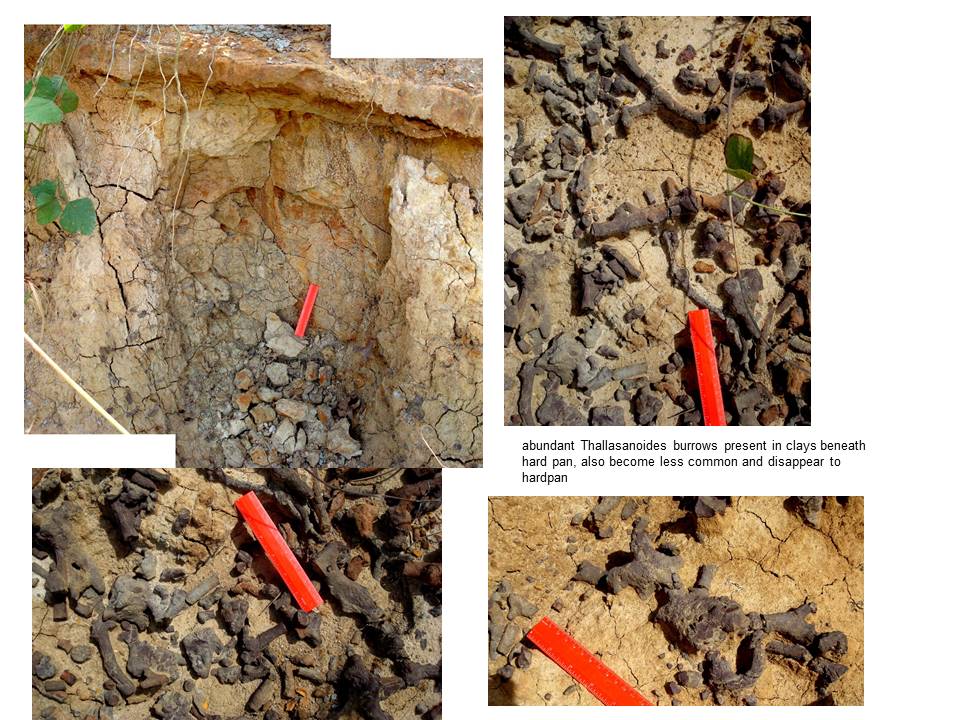 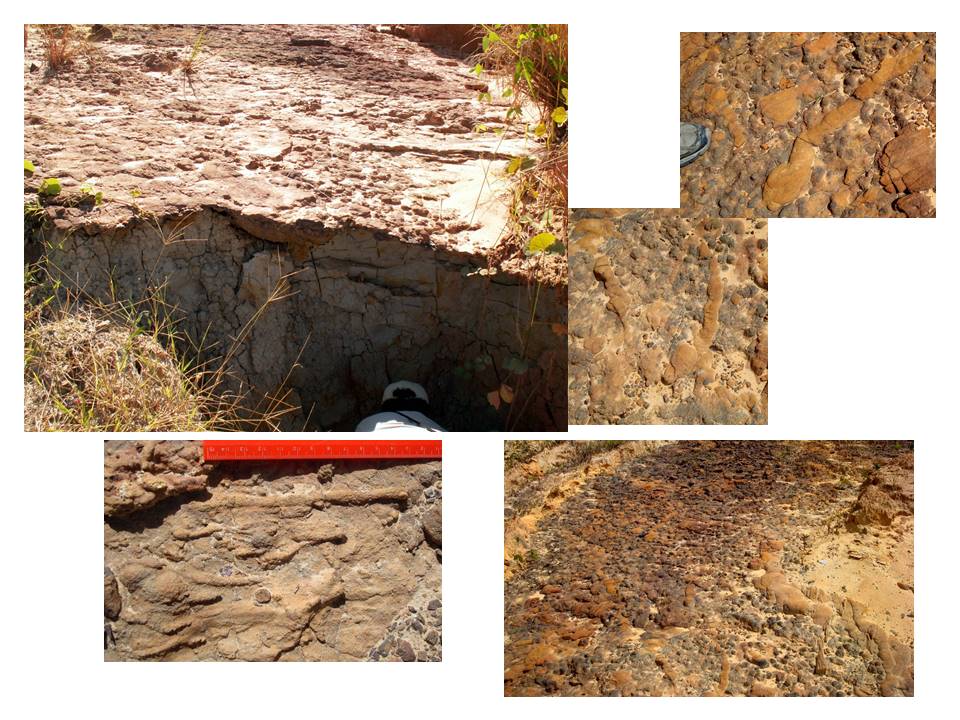 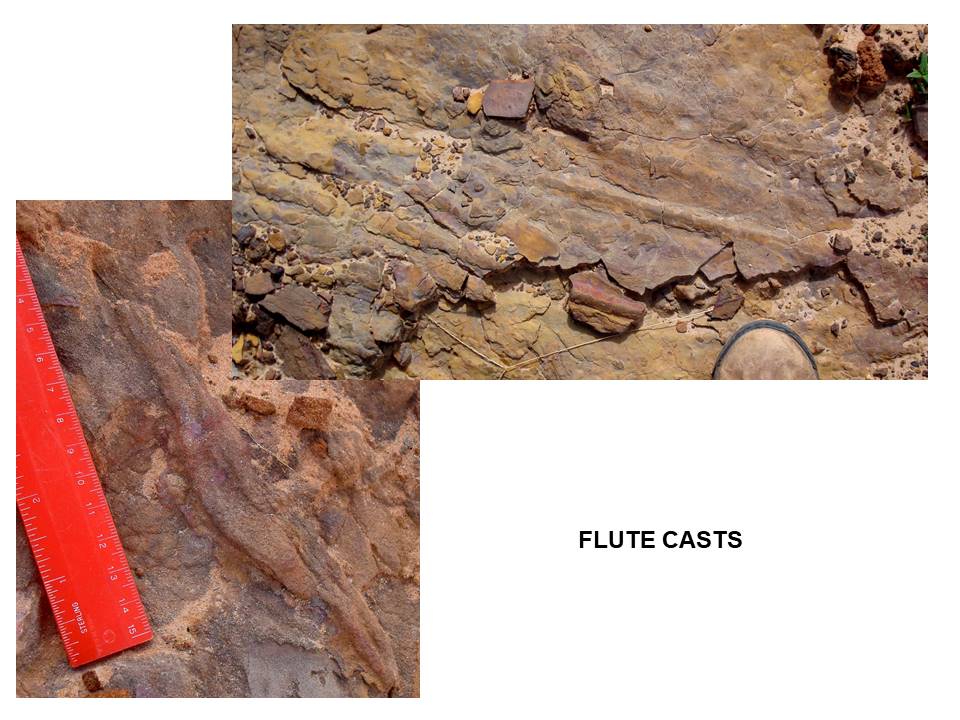 At the base of the sand are large angular claystone clasts (Fig. 10) that show weak imbrication, these claystones are similar to those below the sand and were probably “ripped up” by strong currents. 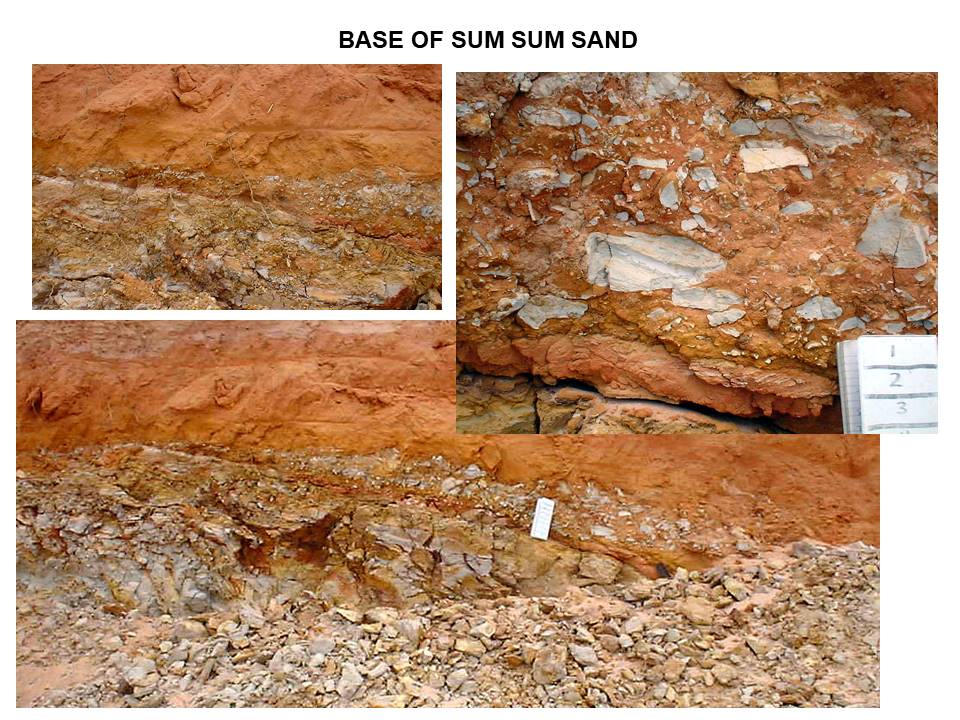 The white basal sands are poorly sorted coarse quartz grains, (Fig 11) with occasional quartz pebbles and “Northern Range” lithologies. These pebbles are also found along the laminae of the units and at the bases of fining upward sands. 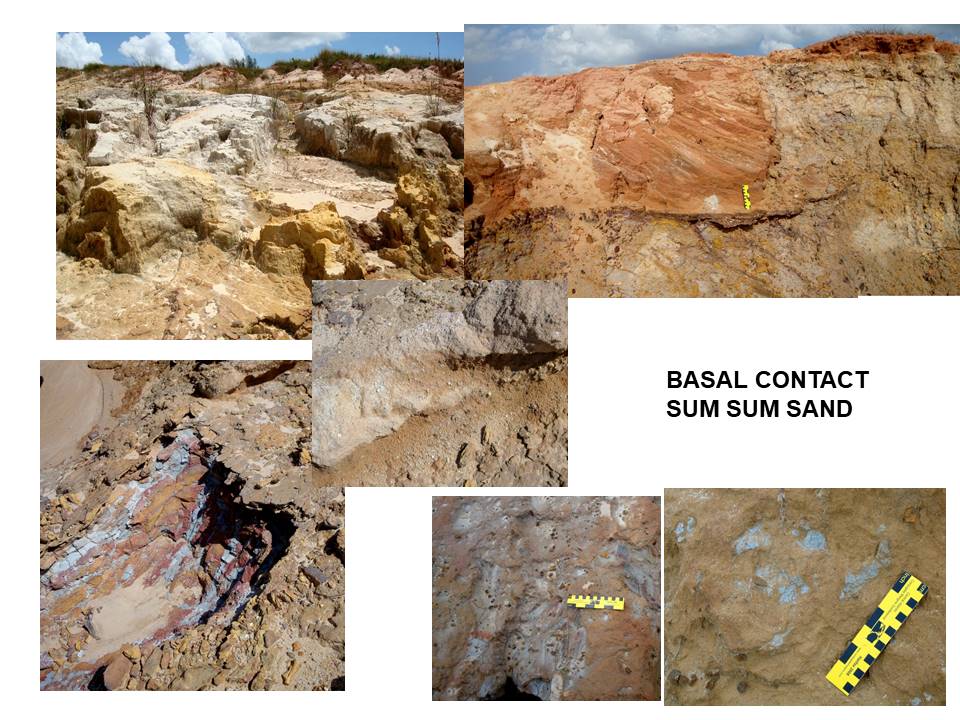 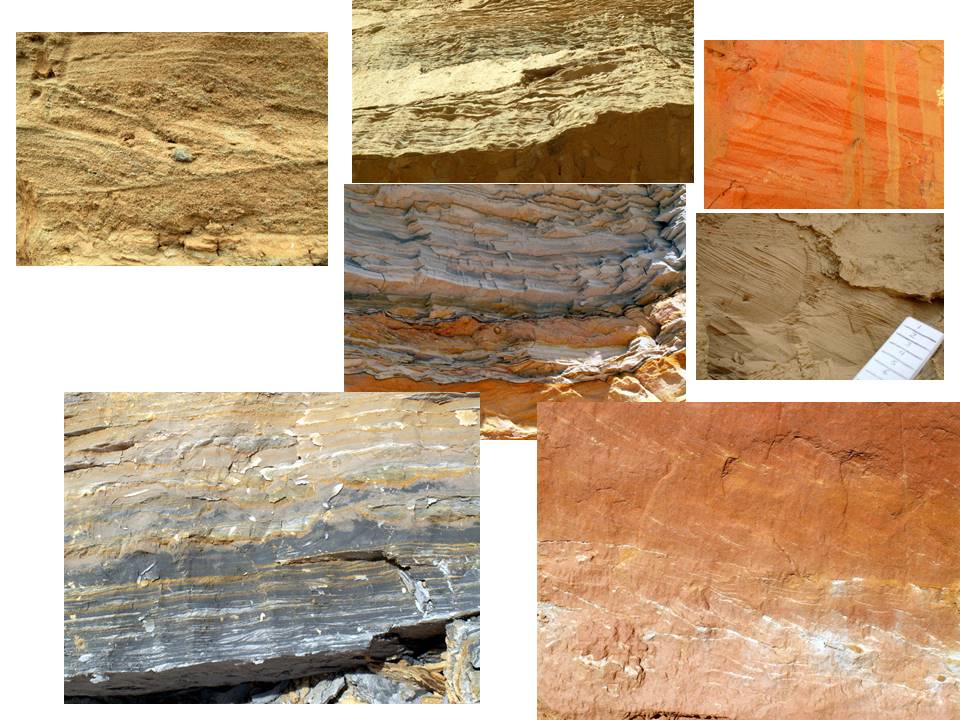 The outcrop at Jumsamco’s main yard on Cedar Hill Road is another strike parallel one that illustrates the very good lateral continuity (Fig. 13) of both the sands and claystones. The colour of the outcrop reflects the sand percentage, light is 100% sand and darker colours increasing amount of thin claystones. 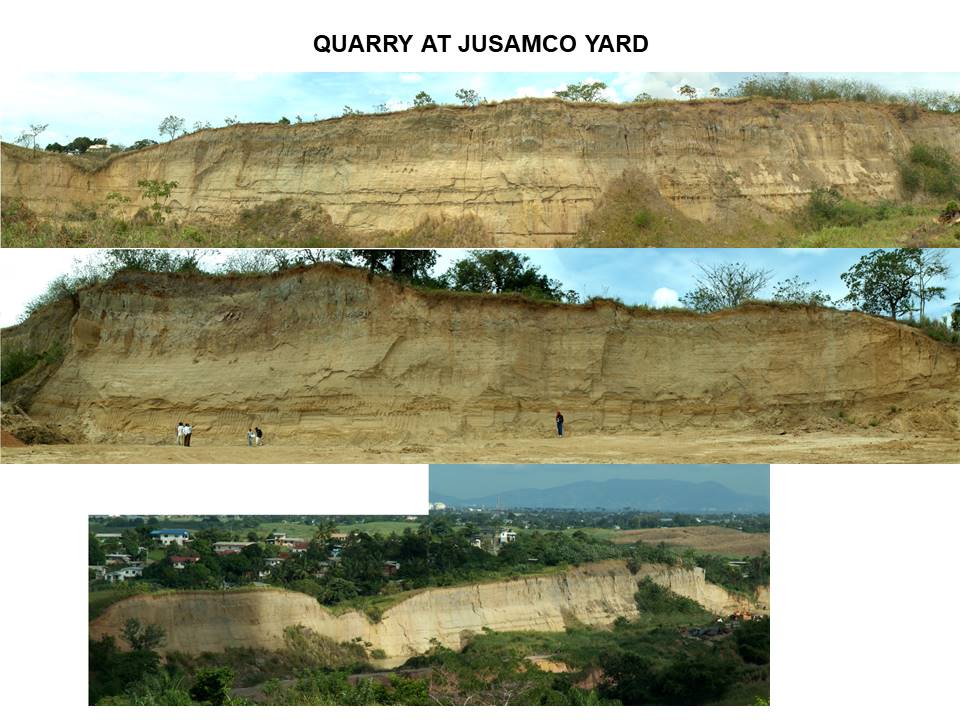 Closer examination of the sands (Fig. 15) shows tidal bundles, climbing ripples and inclined forests that indicate a transport direction to the east. 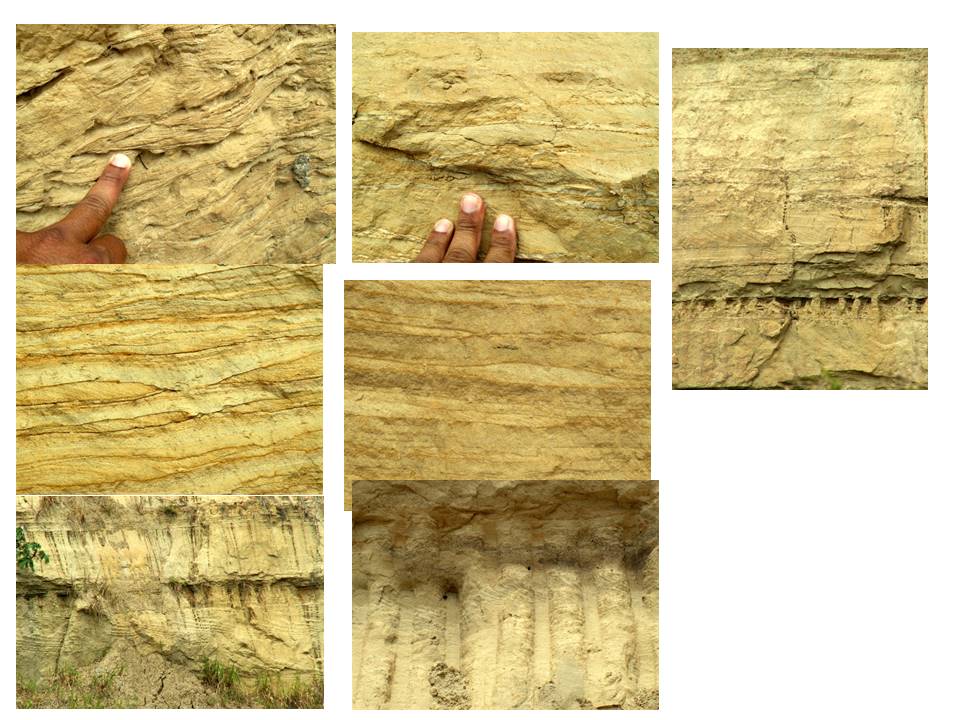 At Sandy View Road the near top of the sand unit is examined, sands and claystones are dominantly (Fig.16) parallel bedded. Internally the sands are dominated by bi-directional clay draped ripples and sigmoidal bundles (Fig.17) with abundant mica in sand The sand beds also thin towards the top of the unit where is capped by a claystone that is dominated by a mono-specific bivalve assemblage belonging to the species Clementia. All of the bivalves are articulated suggesting that they died in place. 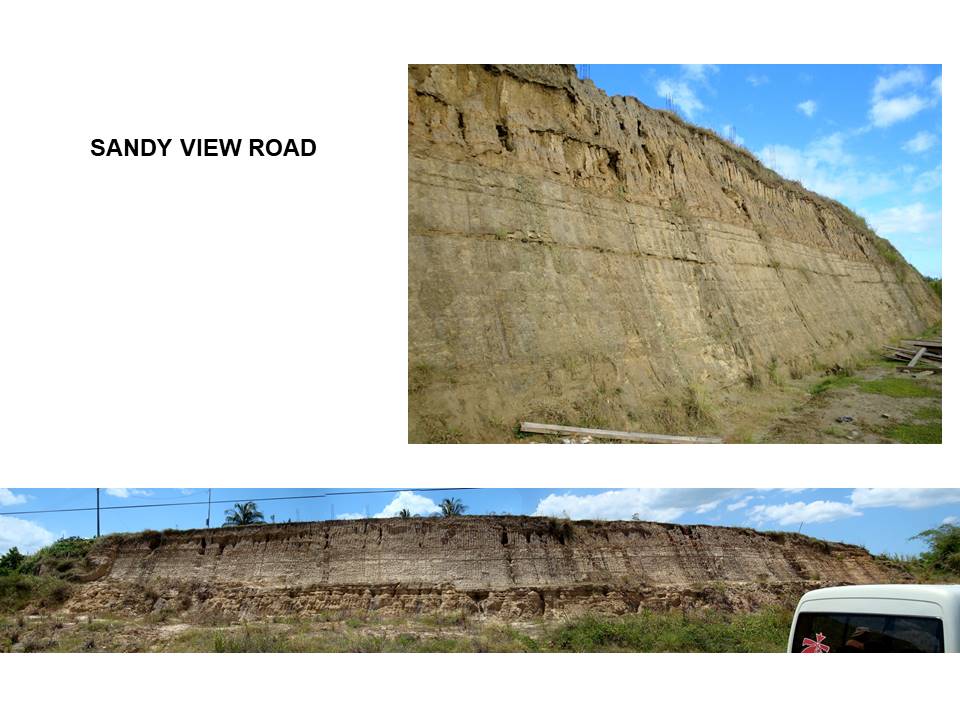 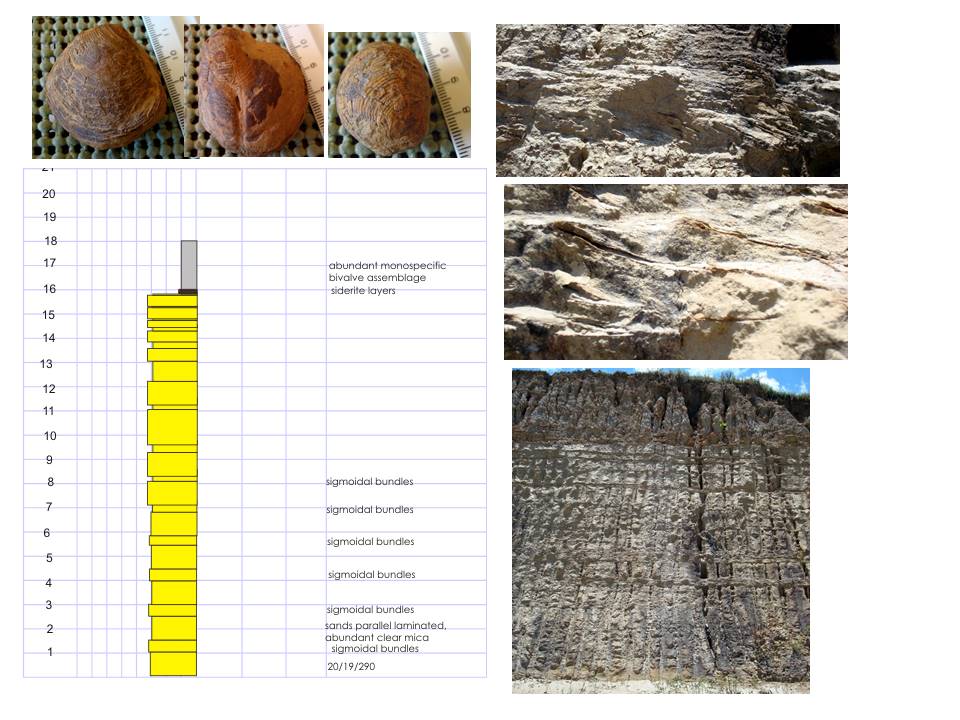 At Temple Street near Diamond Road this outcrop (Fig 18-19) also is dominated by parallel bedded sands and claystones. Internally the individual sand beds have strongly east dipping laminae near their based and sigmoidal bundles to the top. The tops of some the beds have oscillation ripples 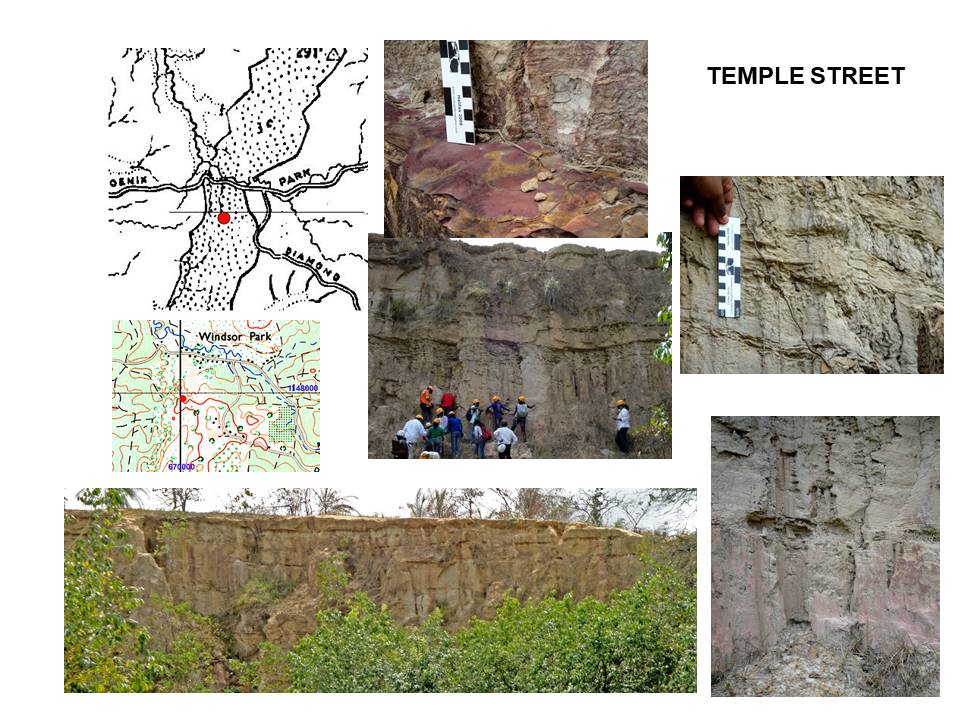 Persad’s Quarry (Fig.21) near Diamond Road lies near the base of the Sum Sum sand. A pale blue grey claystone underlies the sand (Fig.21-22), an iron concretion surface separated the basal clay from the overlying sand. Similar coloured claystone ripup clasts are present at the base of the sand, most of the clasts are rounded and have random orientations. Rare gastropods are present at the base also Thallasanoides. 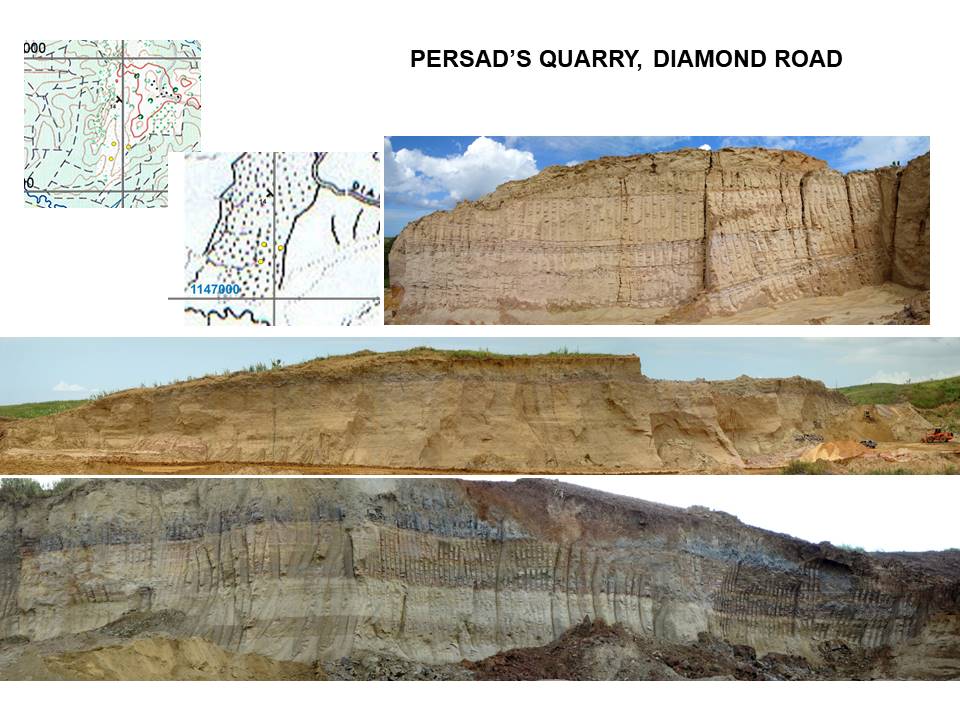 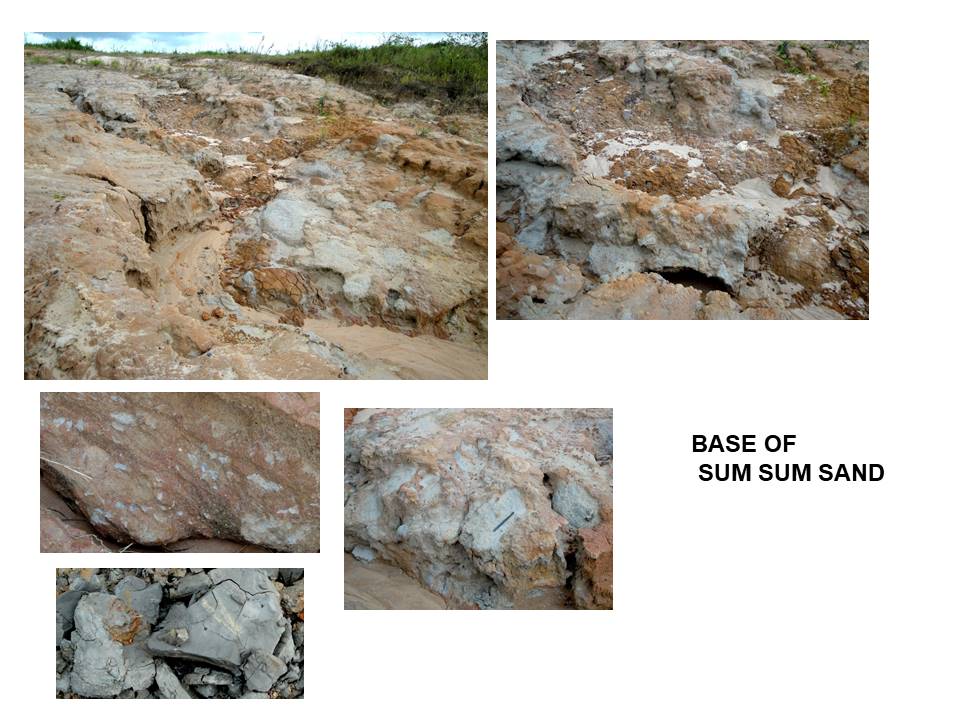 The quarry at Windsor Park near Diamond Road is currently the largest active quarry in the country. Strike views (Fig.23) continue to show parallel bedded sands separated by thin claystones, in dip view the beds and laminae dip to the north and east. Sands are dominantly red orange, however bands of other colours including yellow are common. Laminae with downlap toes, sigmoidal bundles and climbing ripples are common. 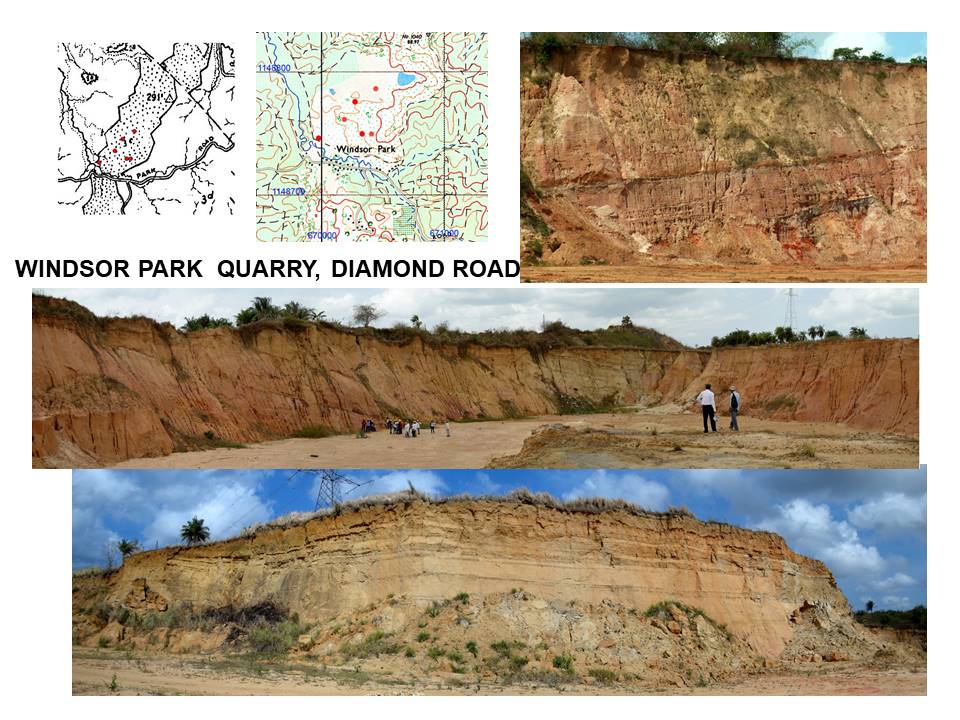 The contact between the basal sand and underlying claystones is marked by an iron concretion surface (Fig.24) The claystones are grey blue in colour and parallel bedded . Overlying sands are coarse, poorly sorted occasionally cross bedded, dominantly quartz with pebbles of quartz, large claystone ripups are also present. 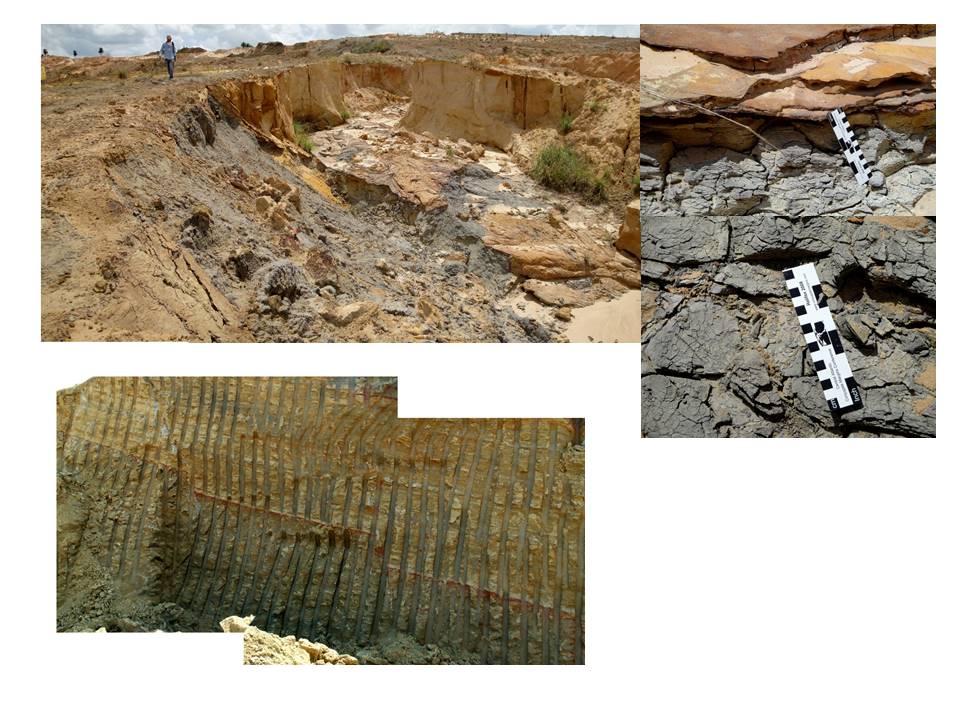 Abundant bedding parallel Thallasanoides (Fig.25) and large turning chambers are common just beneath the hardpan. Flute casts with an average orientation of 2400 – 600 occur on the hardpan. 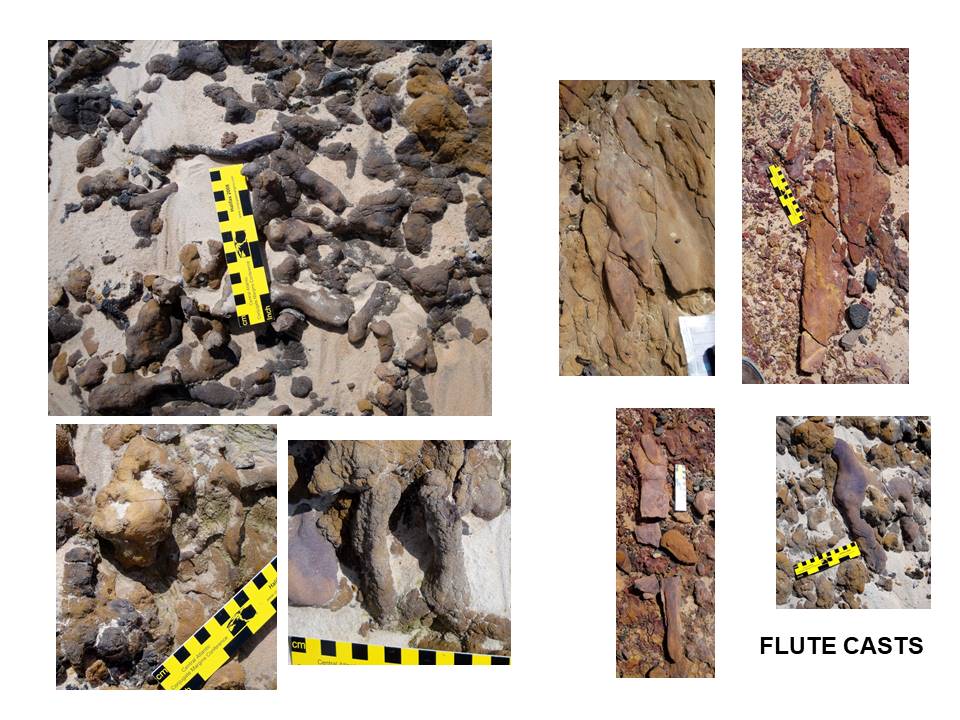 At Quarry Road (Fig.26) near the entrance of the quarry Quarry Road are alternating sand and claystone beds, contacts planar, sands are pebbly, fine upwards, pebbles are dominantly platy and rounded metamorphic and lithic fragments. 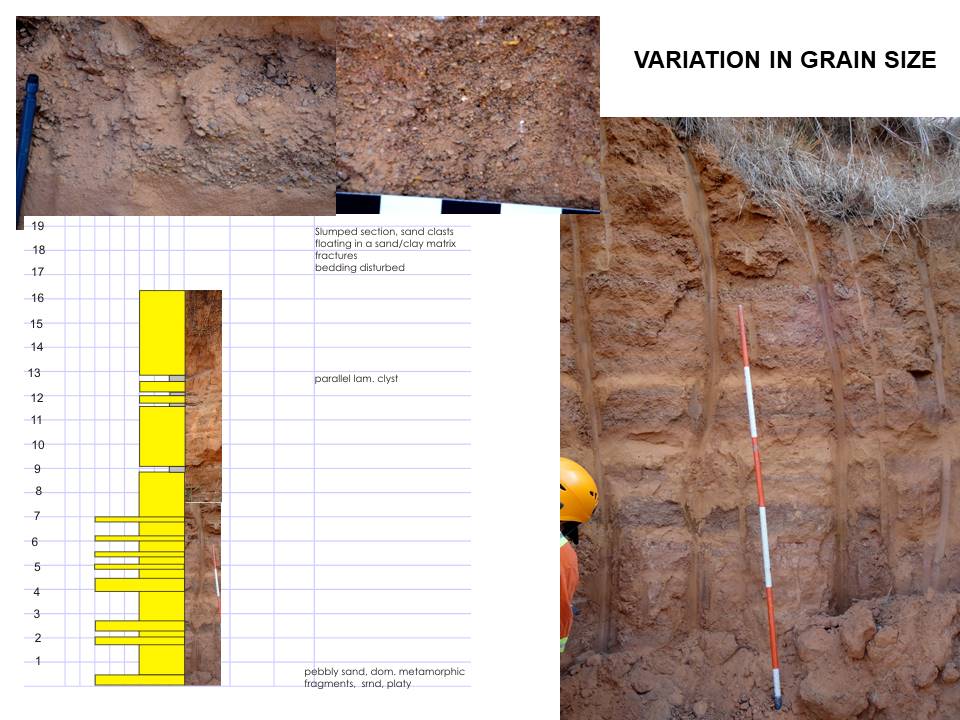 Small normal faults (Fig.27) and fractures with a trend of W – E occur in the basal claystones along the western face and below the hardpan.

At Ravine Sable sands and claystones are still laterally continuous and parallel bedded (Fig.28), lateral variations in sand thickness suggest broad channels. Overall the individual sands show a thinning upward profile with claystones also increasing in thickness. East dipping laminae and tidal bundles dominate within the beds, in places large load casts are found near the bed base (Fig.29). Blue grey claystones (Fig.30) underlie the hardpan that is the contact at the base of the Sum Sum, coarse white, poorly sorted, predominantly quartz grains. 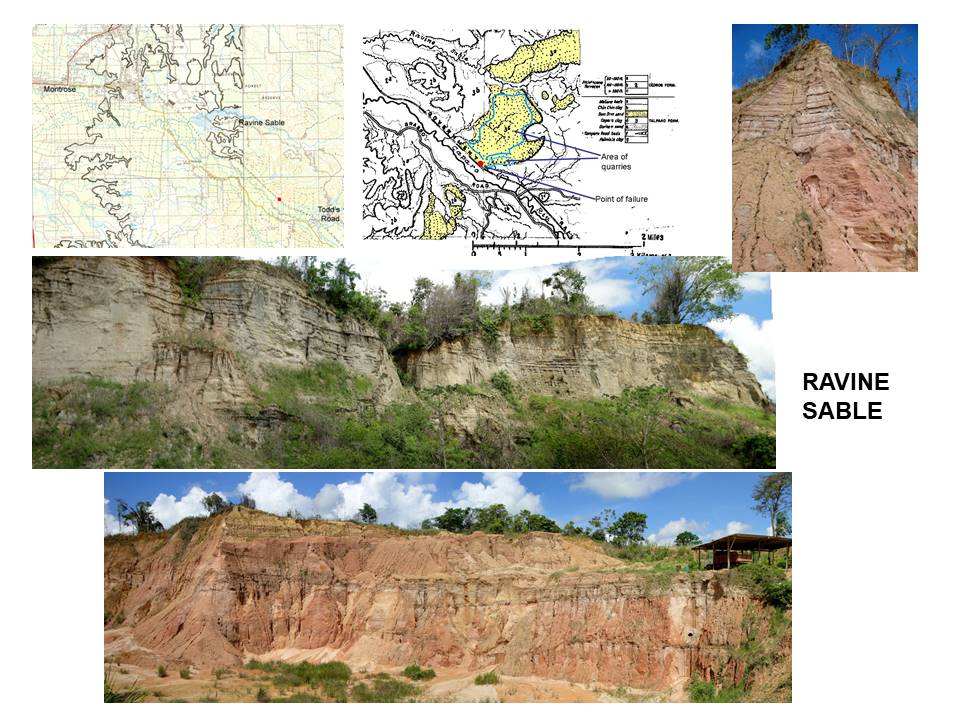 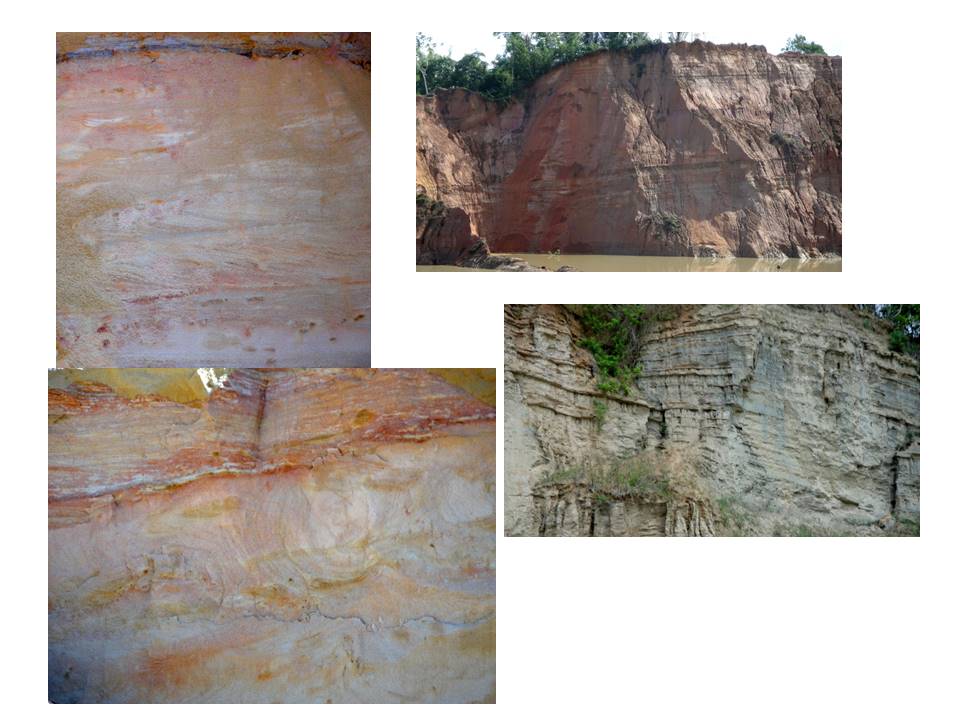 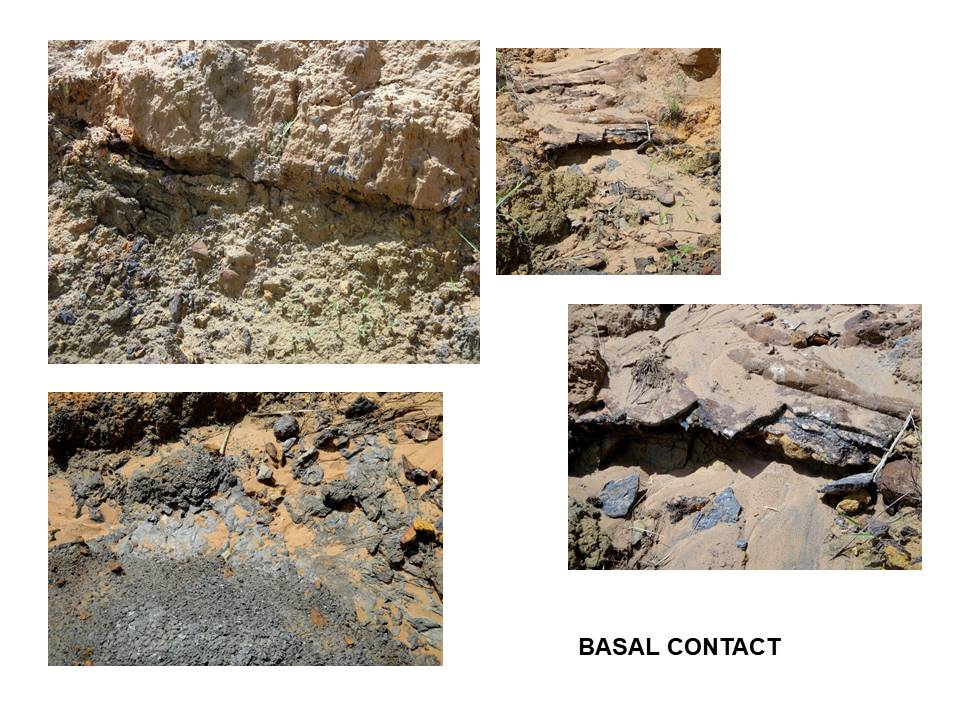 The underlying Caparo Claystone is massive blue grey, mottled in places, at La Cuesa Road (Fig.30) is found a thin glauconitic sand that is rich in disarticulated oysters, Anadara and Taras. 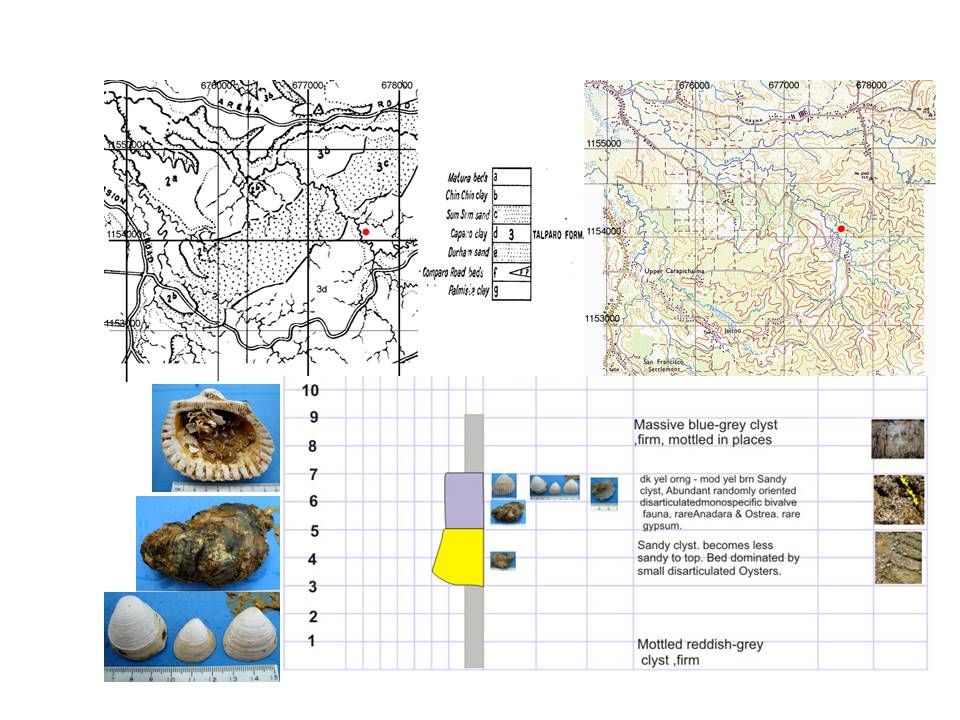 An overview of the outcrops reveals that the basal clays are parallel laminated, occasionally smelling of sulphur suggesting an anoxic environment, the bivalves at la Cuesa Road indicate a marine environment at times. Locally abundant Thallasanoides and oher bioturbation also suggest a marine environment. Sedimentary features at the base of the sand indicate a SW – NE transport direction of sediments. Abundant angular ripup clasts indicate very strong erosive currents and rapid redeposition of these clasts. Sigmoidal bundles clay draped and climbing ripples suggest a tidal environment. The coarse white sands with metamorphic fragments are similar to the Cunapo Conglomerate, except much finer grained.
The depositional environment is one where alluvial fan deltas of Cunapo Congolmerates flow south from the Northern Range and Paria Peninsula. The sand sized material near the edges of the delta is then incorporated into the west – east flowing estuary arms of the Orinocco River. This estuary is thought be constrained to the south either by rising highs associated with the incipient Central Range or paleo highs caused by the mid-Miocene Orogeny. 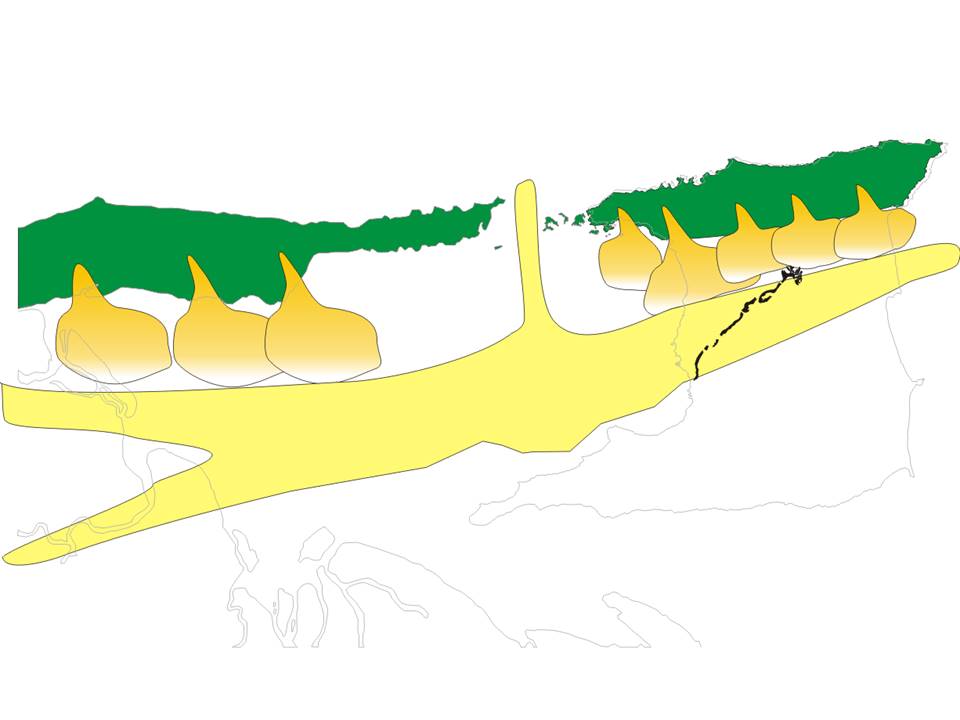 An attempt has been made to fit this unit into the global sea level curve. The thick claystones are interpreted to represent highstands of sea level, while the sands are deposited during lowstands of sealevel. The erosional contacts at the base of all the sand units appear to confirm this. 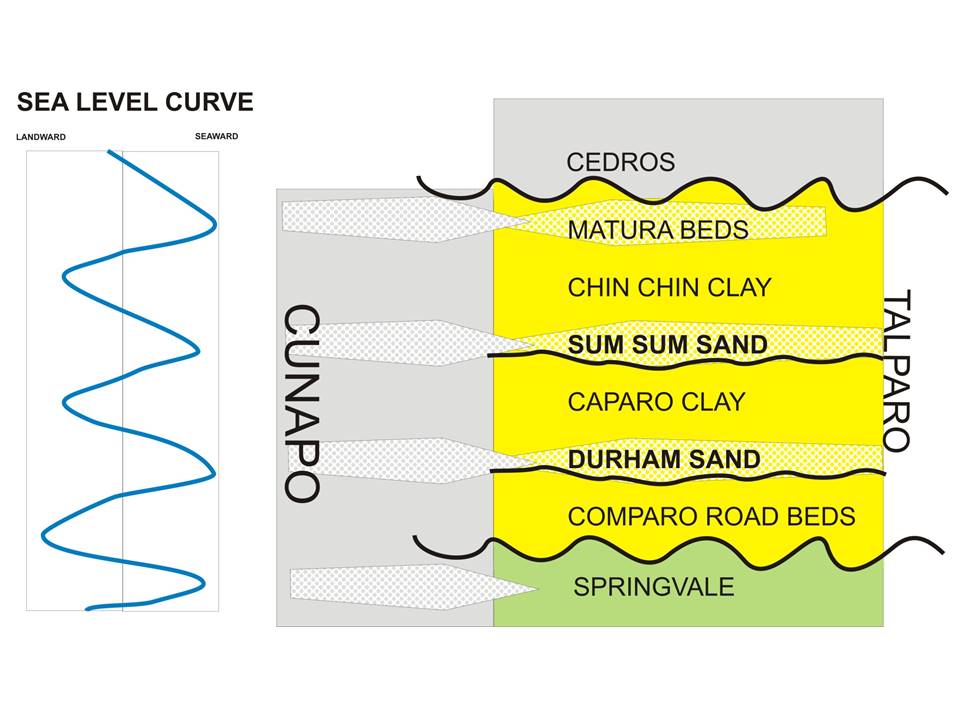