The Identification Of The Depositional Environments Of The Cruse, Forest And Morne l’Enfer Formations In The Southern Half Of The Gulf Of Paria, Trinidad, West Indies

The Pliocene of western Trinidad and the Gulf of Paria is dominated by three progradational pulses, which become increasingly river dominated as they get younger. The Cruse, Forest and Morne l’Enfer Formations represent a progradational sequence of deep water turbidites to shallow water and fluvial sediments. These formations are separated by two regional flooding events that were identified by palaeontology and log correlation, the Upper and Lower Forest Clays. The base of these claystone intervals are marked by unconformities, which in places is angular.

Fig.1 Location of the study area.

Five intervals have mapped through the study area (Fig. 1), these were the Top Forest, Forest 5, Forest 3 and Forest 1, Top Cruse and Upper Cruse 4. Paleobathymetries and possible depositional systems were interpreted using a combination of palaeontology, log shapes and interval RMS extractions.

For the Upper Cruse, bathymetries range from middle neritic to inner neritic in depth. From the western half of the Gulf of Paria towards the Trinidad shoreline changes in interpreted water depth are seen, from non marine in Well A in Venezuela to inner neritic in South West Soldado and Soldado Main Field. Similarly wells in the POSA Principal area (Well B) have an inner neritic – marginal marine bathymetry.
East Soldado probably represents the edge of one of the Upper Cruse deltas as the section thins northward from 2,500’ in the south to 243’ in Well L to the north. Paleobathymetries range from middle to outer neritic with significant reworking of Eocene and Oligocene fauna. This reworking probably represents the slumping of the old shelf edge and the incorporation of this material into the Cruse.
Onshore in the southwest peninsula of Trinidad three wells were analysed. Well J has an inner neritic setting with reworked outer neritic fauna. Log signatures are thin (<100’) coarsening upwards. The Cruse interval to the top of the Lower Cruse is 5,000’ thick, this is anomalously thick, as the entire Cruse section is typically is 4,500’ onshore. It is thus suggested that previously unrecognised growth faulting may be the cause of this. As an example, in the Soldado Main Field there is a listric normal fault, with throw down to the east and increased section thickness.
In Well I, the Upper Cruse is made up of 2 sand packages, the lower one is coarsening upwards capped by fining upwards, then a clean claystone then a blocky capped by a fining upward. Bathymetries indicated is inner – middle neritic. Section here is only 600’ thick and is probably faulted. Well K, further onshore Trinidad has a marginal marine setting.
Channel complexes are visible in the 3D seismic in the Pedernales area, these channels trend towards South West Soldado. In the POSA – W Soldado area, similar channel complexes are visible .The seismic near Well F shows a channel complex that is interpreted to be trending WSW – ENE. Lateral migration of sediments within the channel is seen by the dipping reflectors, this is confirmed by the Interval RMS extraction.
The northern limit of the Cruse is defined by: (1) an onlap onto the regional 10.5 m.y. unconformity in the western half of the Gulf of Paria, (2) the Los Bajos Fault in Soldado North and East Field. However, in the Point Ligoure and Fortin Offshore area that straddles the Los Bajos Fault the Cruse is present on both sides of the fault and extends onshore to the Point Fortin West Field.
The paleobathymetric and Environment of Deposition (EOD) maps (Fig. 2) suggest that more that one lobe of the proto-Orinoco was actively prograding at the same time. One from the SW through Well A towards SW Soldado and Main Field and the other from the south through Well K towards the Point Fortin area. 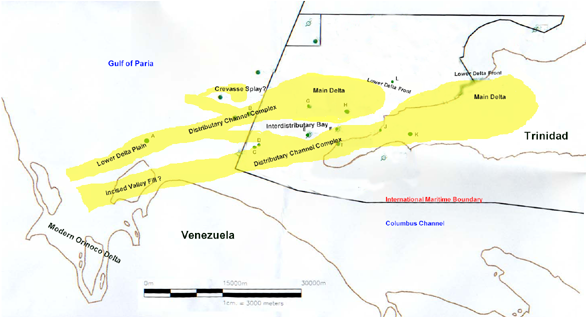 Fig. 2. Interpreted Environment of Deposition for the Upper Cruse Formation

Through most of the Forest interval reflectors are fairly parallel and show little of the channelisation seen in the Cruse.
The Forest also onlaps and thins out onto the 10.5 m.y. unconformity in a northerly direction. 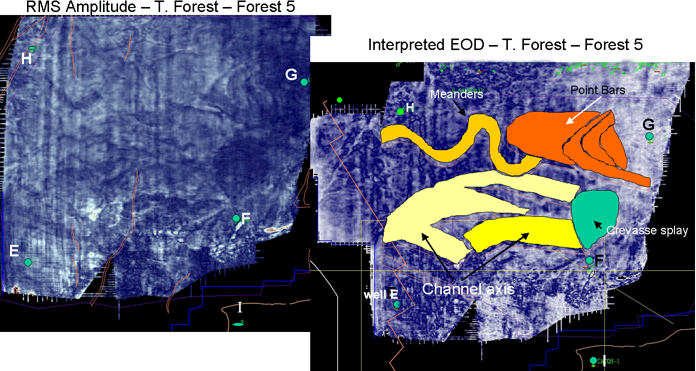 Fig. 3 RMS Amplitude extraction and interpreted EOD for the uppermost part of the Forest Formation.
The top of the Forest/Base of the Morne L’Enfer is marked by an unconformity referred to as the Base Upper Forest Clay (BUFC). Examination of the 3D seismic reveals that in places it is angular. Here, it has been interpreted as an incised valley, which in Lower Morne L’Enfer time eroded very strongly into the underlying Forest. Between Well E and Well F, it trends E – W and then trends NNE – SSW. The result of this erosion is that the subcrop of the Forest gets progressively older to the south (valley axis).
The LMLE in Well I the paleobathymetry indicated is inner neritic with echinoids and mollusc fragments. Well J is marginal marine – estuarine. Within the valley (Fig. 4) sediments can be to onlap from the valley axis towards the edges, later this is covered by west to east prograding sediments until the valley has been filled in. Finally the reflectors are continuous and parallel reflecting delta front and lower delta plain sediments. 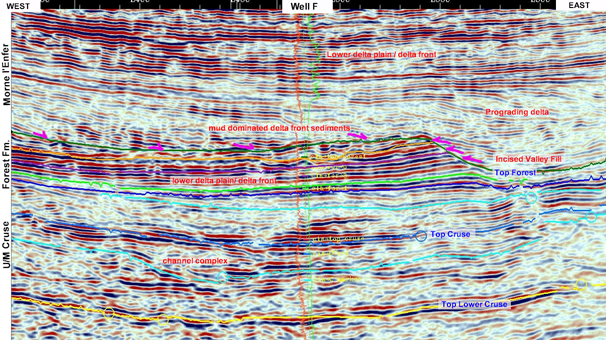 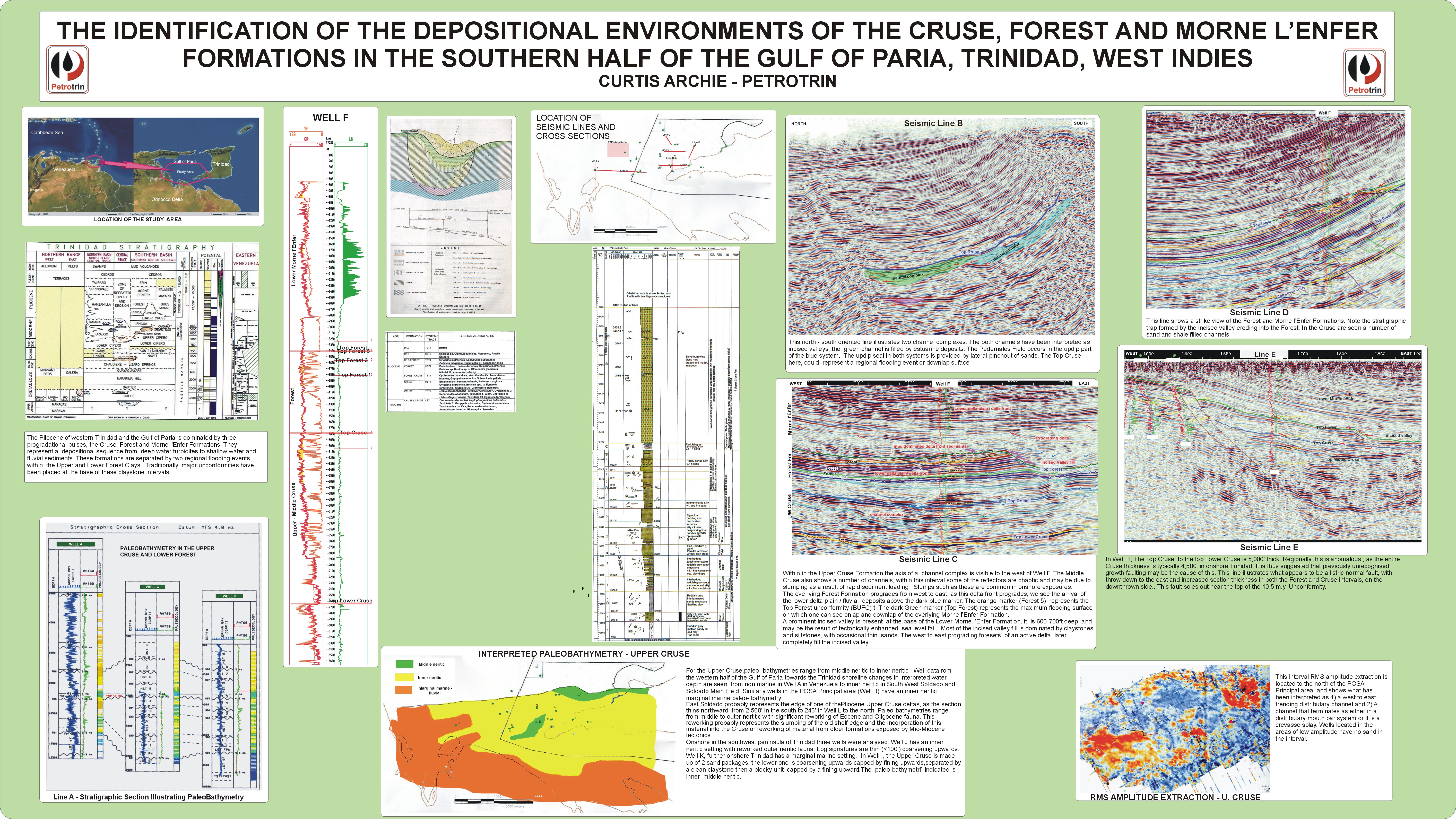 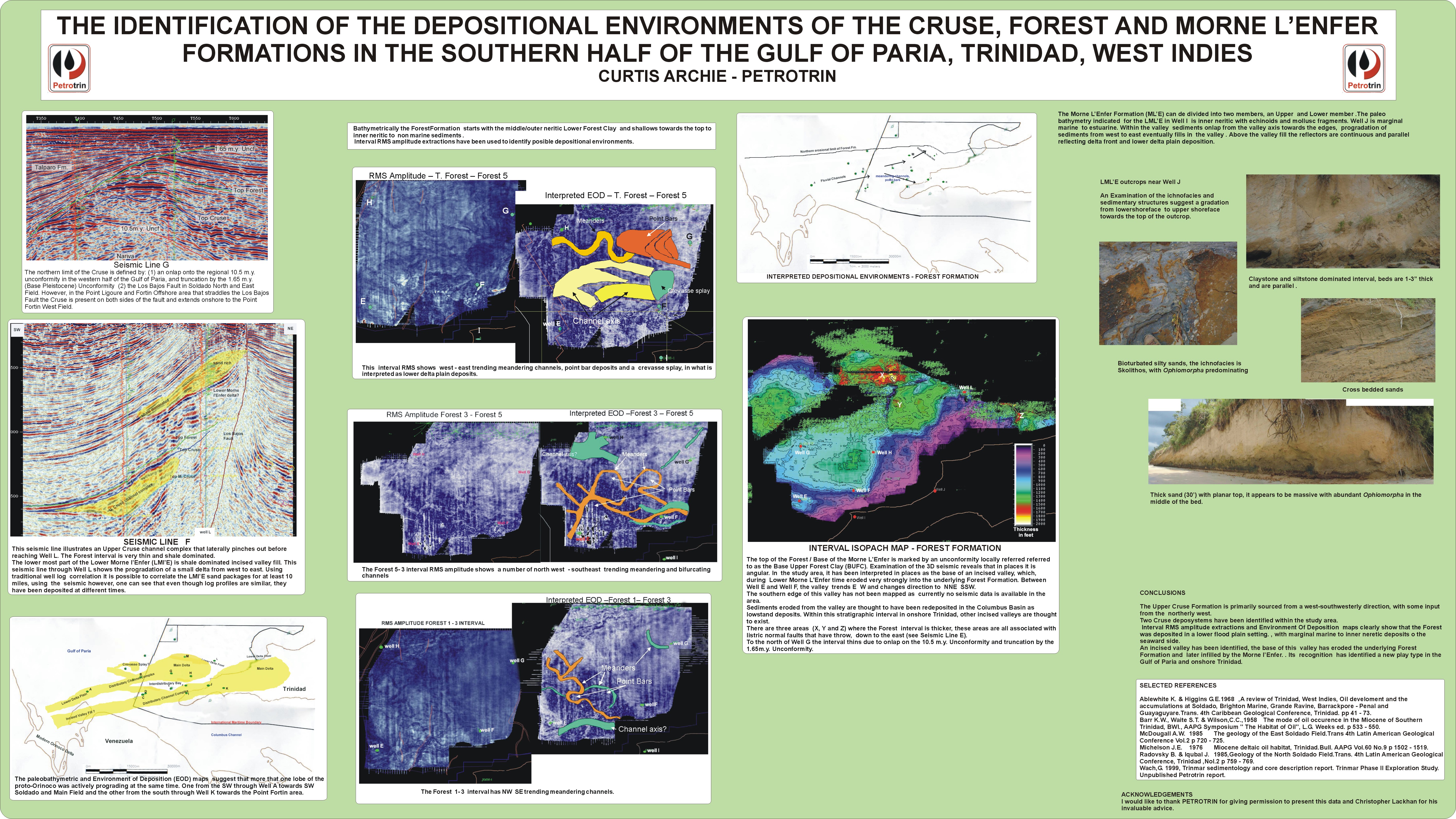