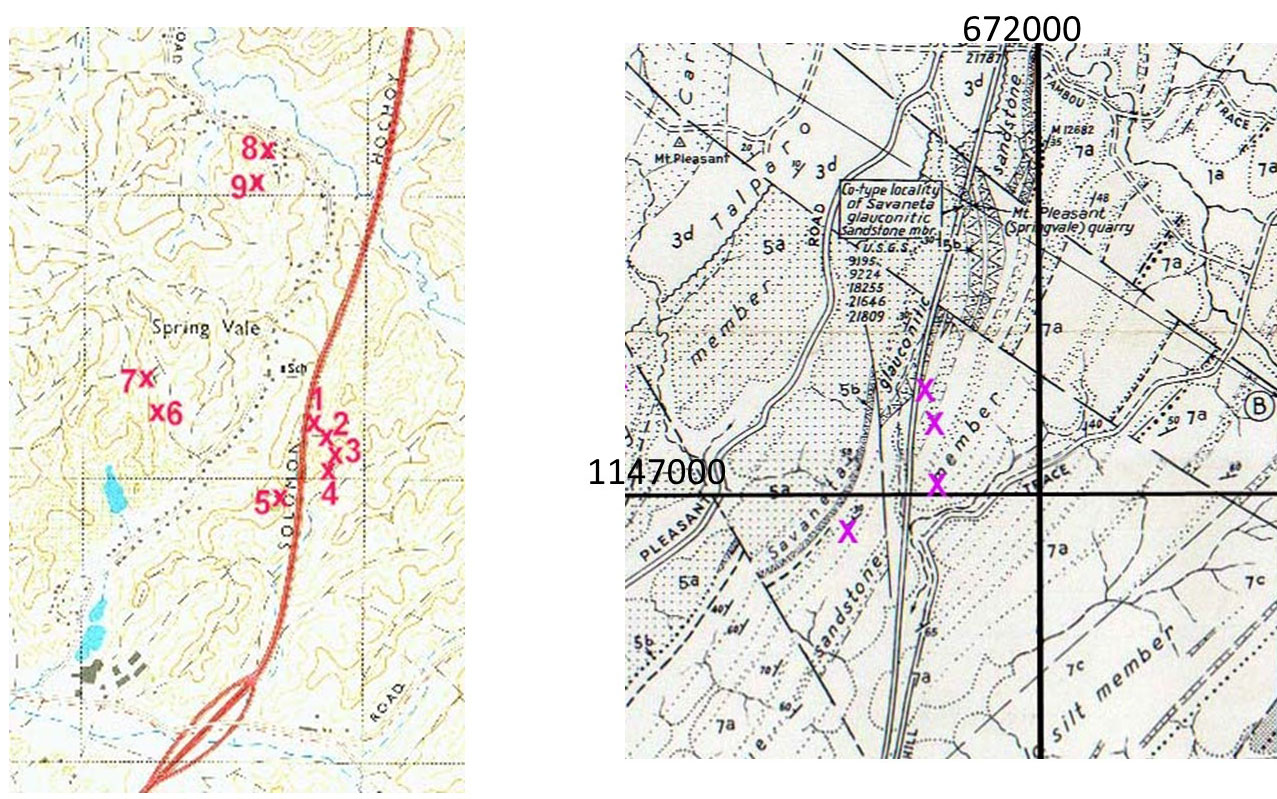 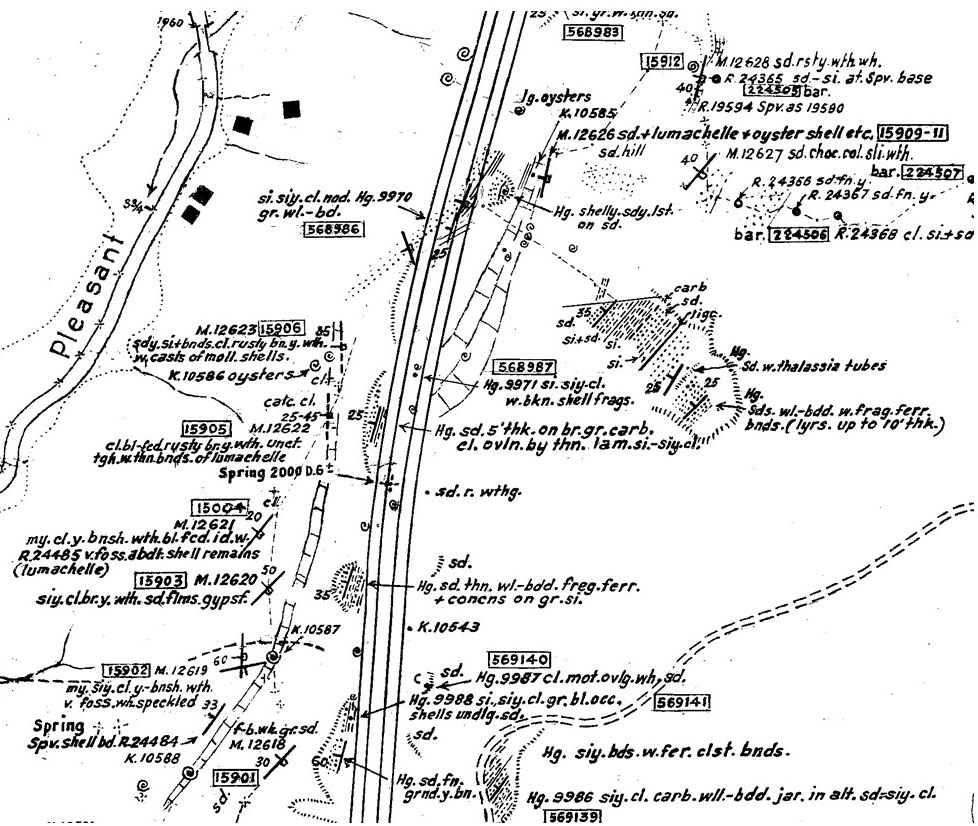 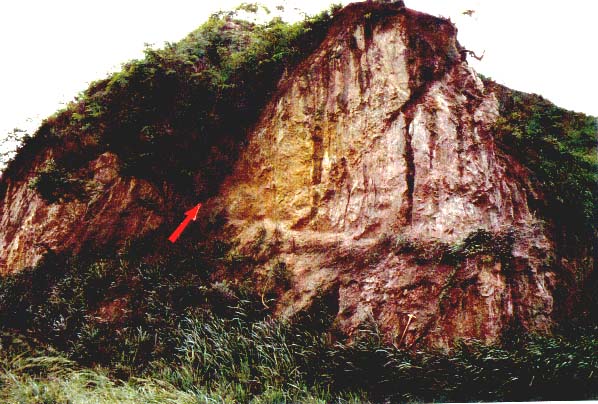 The Forres Park outcrop in 1995 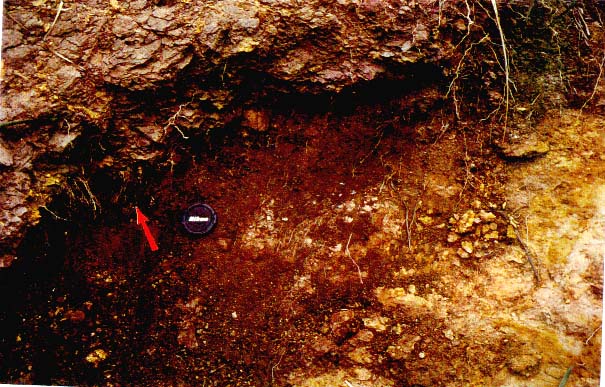 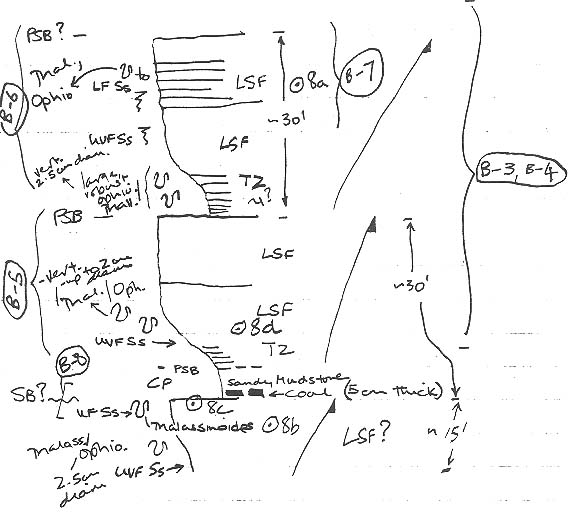 Interpretation of the 1995 outcrop by Antony Sprague

The section exposed at the outcrop consists of four repeated packages, consisting of claystone at the base with a coarsening and thickening up sand beds capped by minor clay and thin lignites, that are in turn capped by claystones
The Telemaque member of the Manzanilla Formation at this locality is expressed as thick sand units, well bedded with interbedded rippled silt and thin sands. The sand is fine – very fine grained, sub-angular to sub-rounded with abundant clear mica
Skolithos burrows are common, dominated by two ichnogenera, Ophiomorpha and Thalassinoides. The burrows are robust up to 5 cm in diameter and are present in both the horizontal and vertical planes . The horizontal burrows probably represent the burrow of a callianassid type shrimp. This burrow is restricted to the lower shoreface / low energy environment. The vertical burrows suggest high energy environments with rapid burial of organisms, the burrows representing escape structures. Ophiomorpha are common in sands while Thalassinoides occur in clays.
Based on the sedimentary and biogenic structures observed at the outcrops it is suggested that they represent a series of coarsening up sequences with water depths ranging from lower-shoreface to upper-shoreface. A. Sprague (EXXON-Mobil) suggests a wave dominated shoreline. The presence of 4 lignite beds suggest a lagoonal environment, the absence, however of identifiable plant material or rooted layer, together the presence of extensive bioturbation above and below the layer, and the erosive base of all of the beds indicates a reworked deposit. The coal has been interpreted as a sequence boundary.
The gypsum although indicating a sabkha type of environment is most likely a secondary feature caused by weathering of the lignite as the two are found in the same stratigraphic interval
EPOCHA has indicated that the outcrop represents a coastal to lower delta plain, and includes crevasse splay and overbank sands, sand bars and interdistributary bay / swamp.
The top of the section is unconformably overlain by the shell beds of the Savannetta Glauconitic sandstone member of the Springvale Formation.

The pictoral description of the outcrop begins at the base 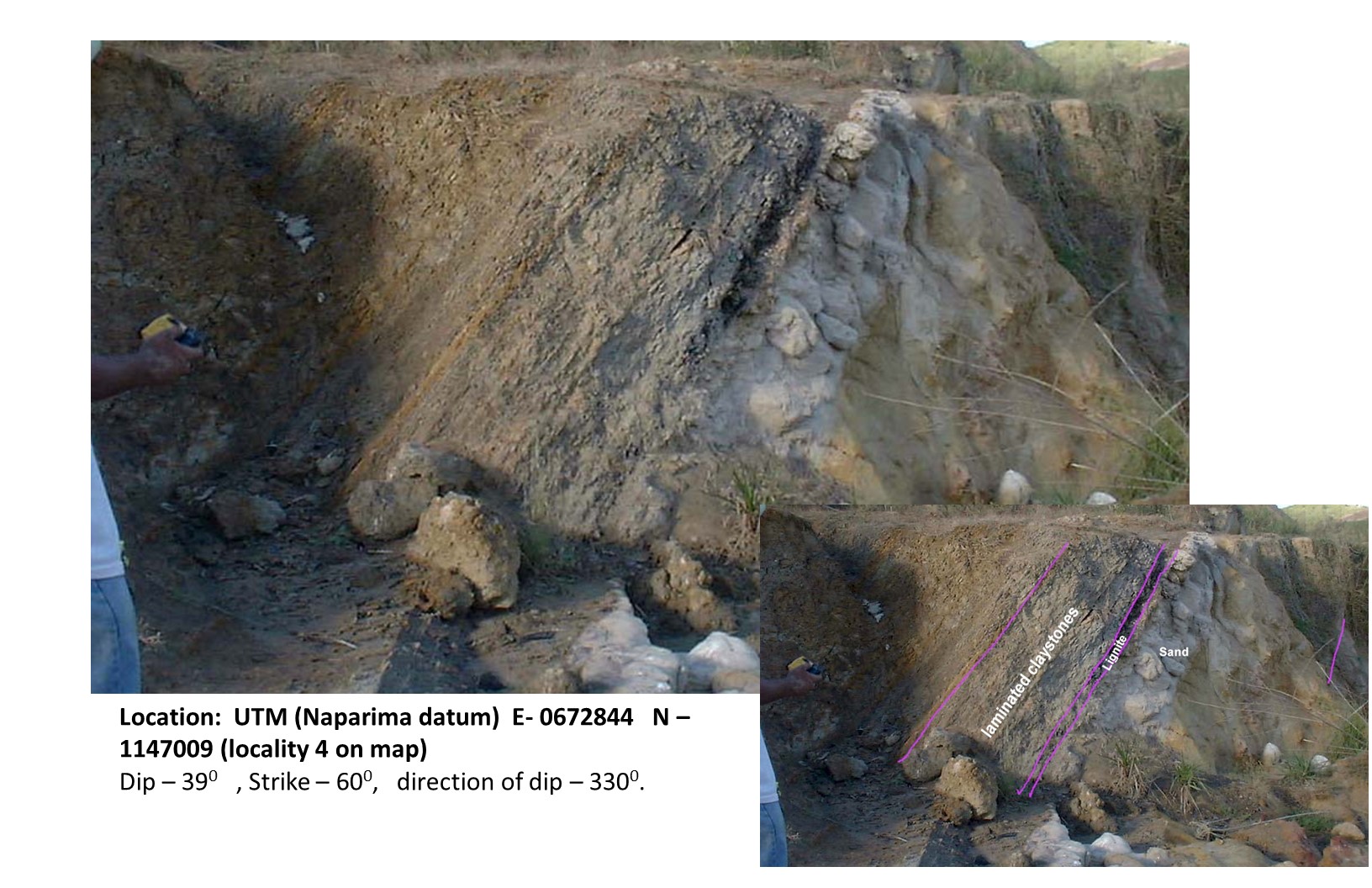 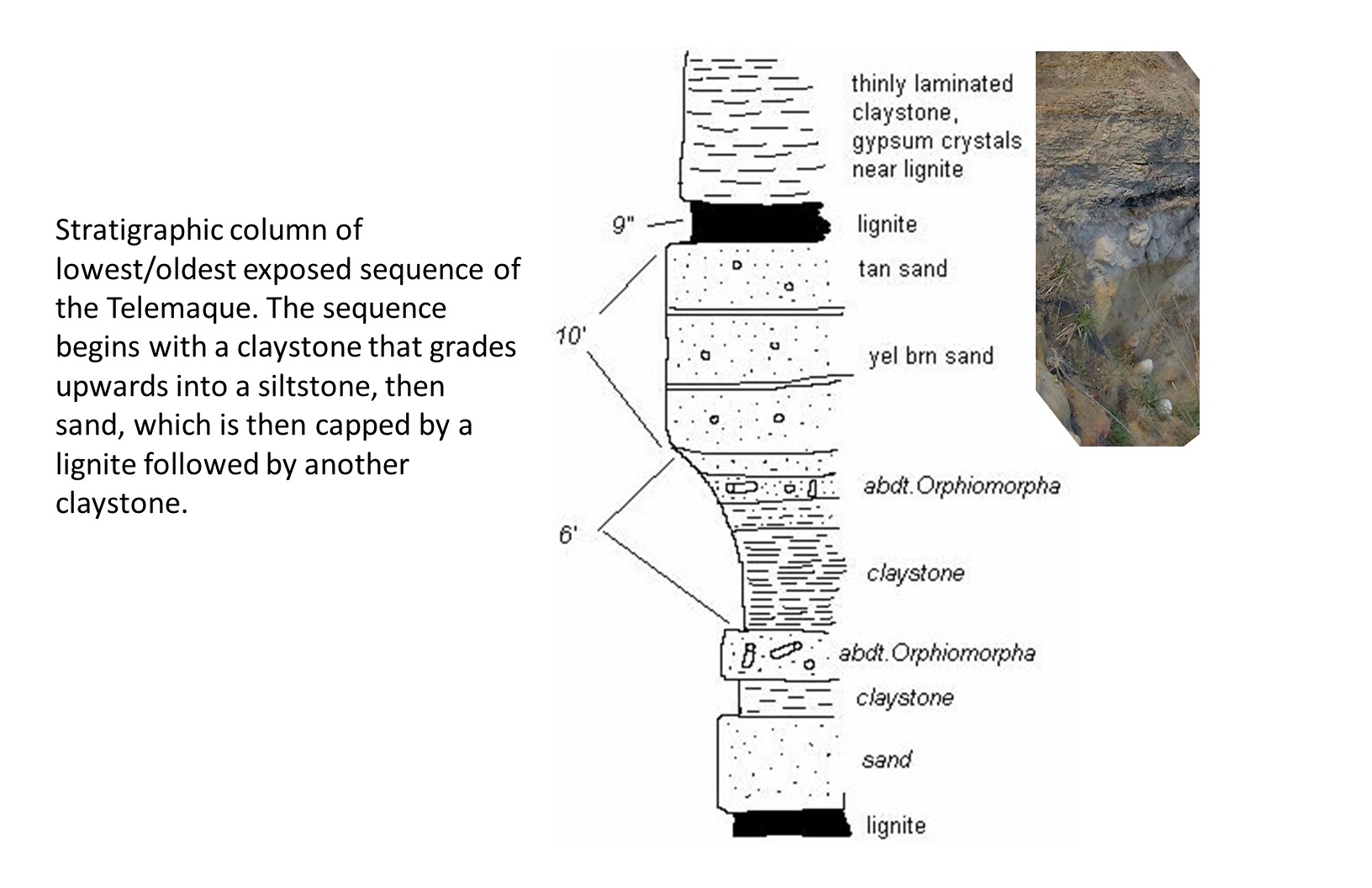 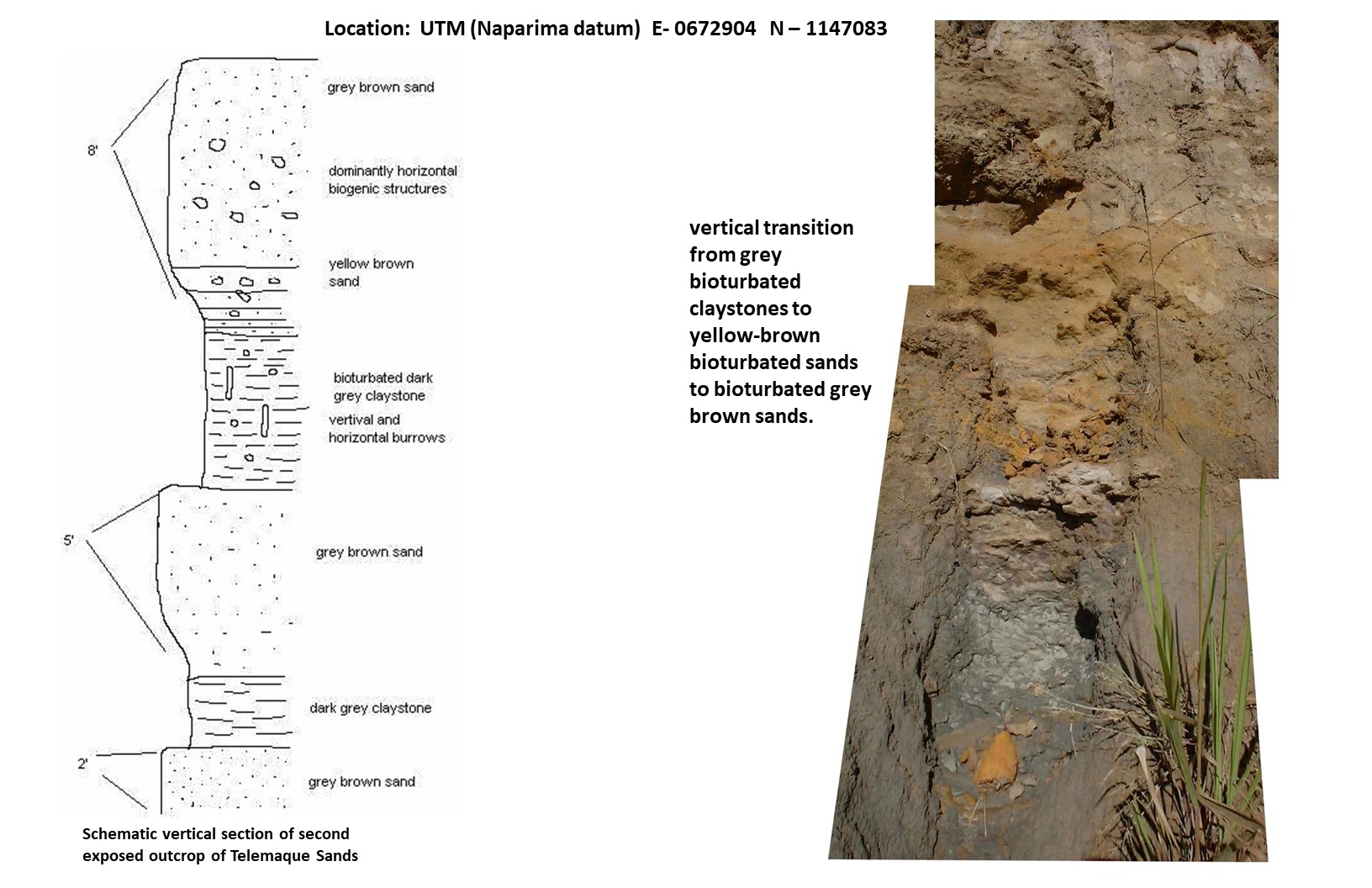 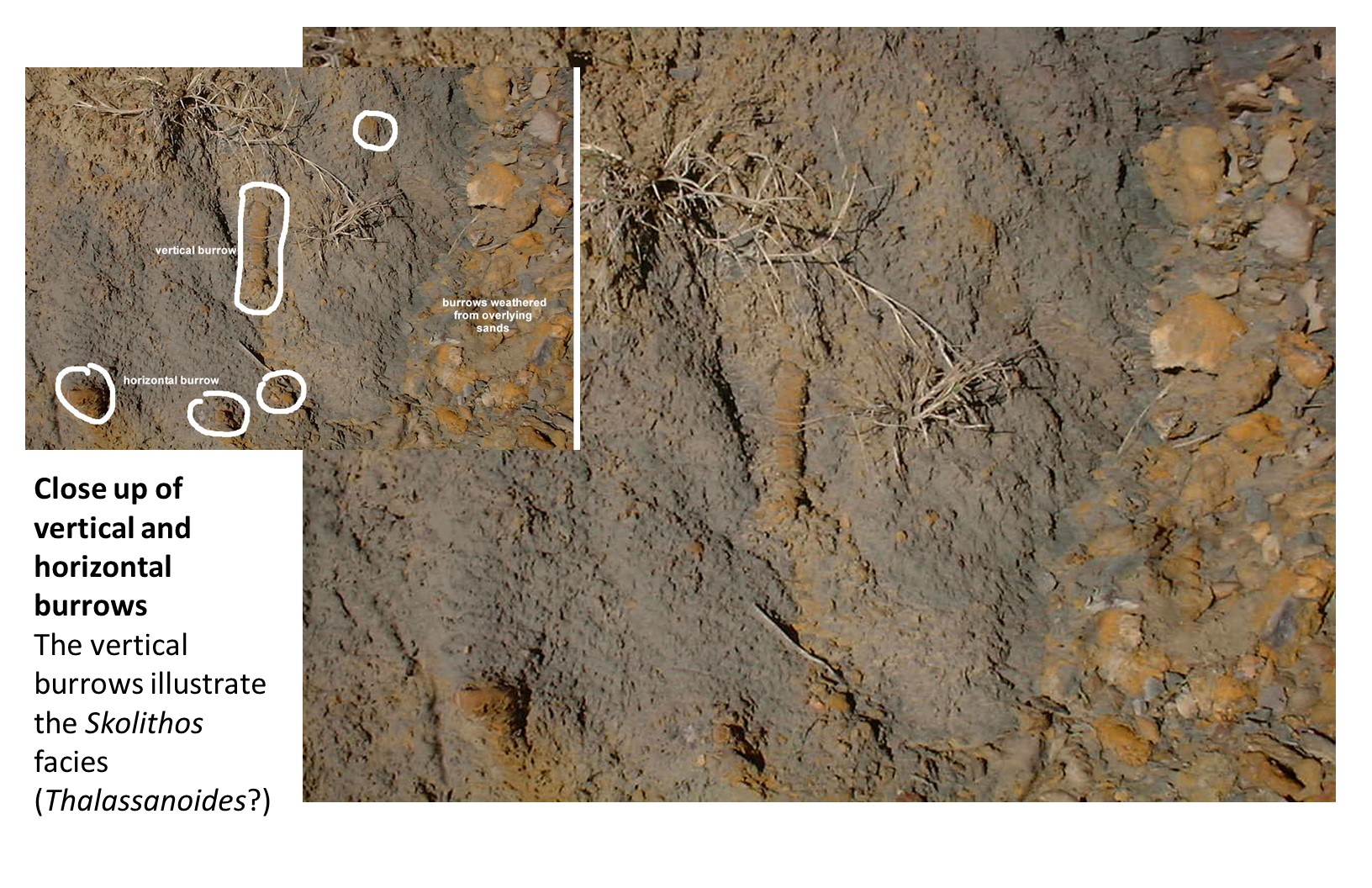 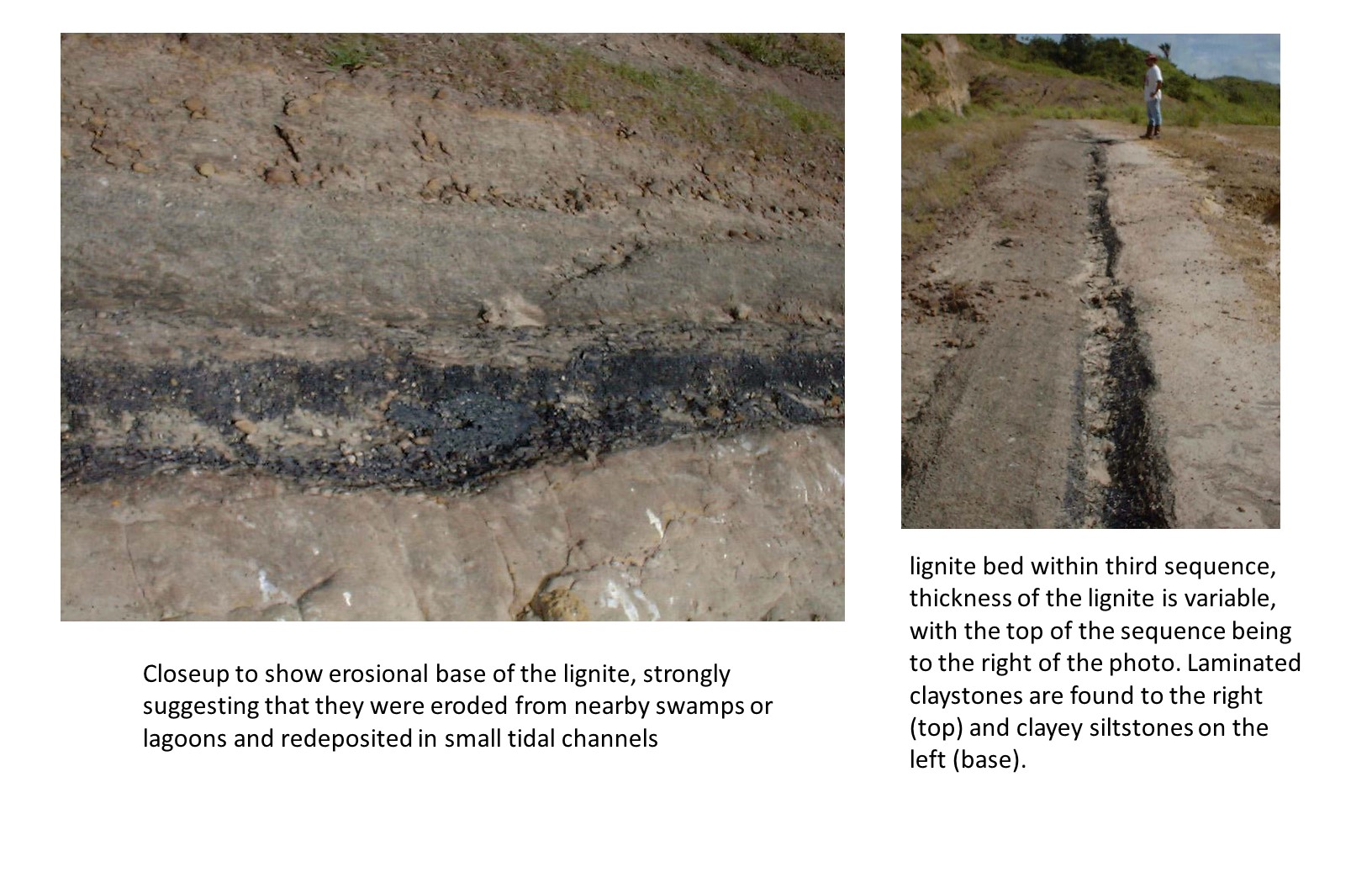 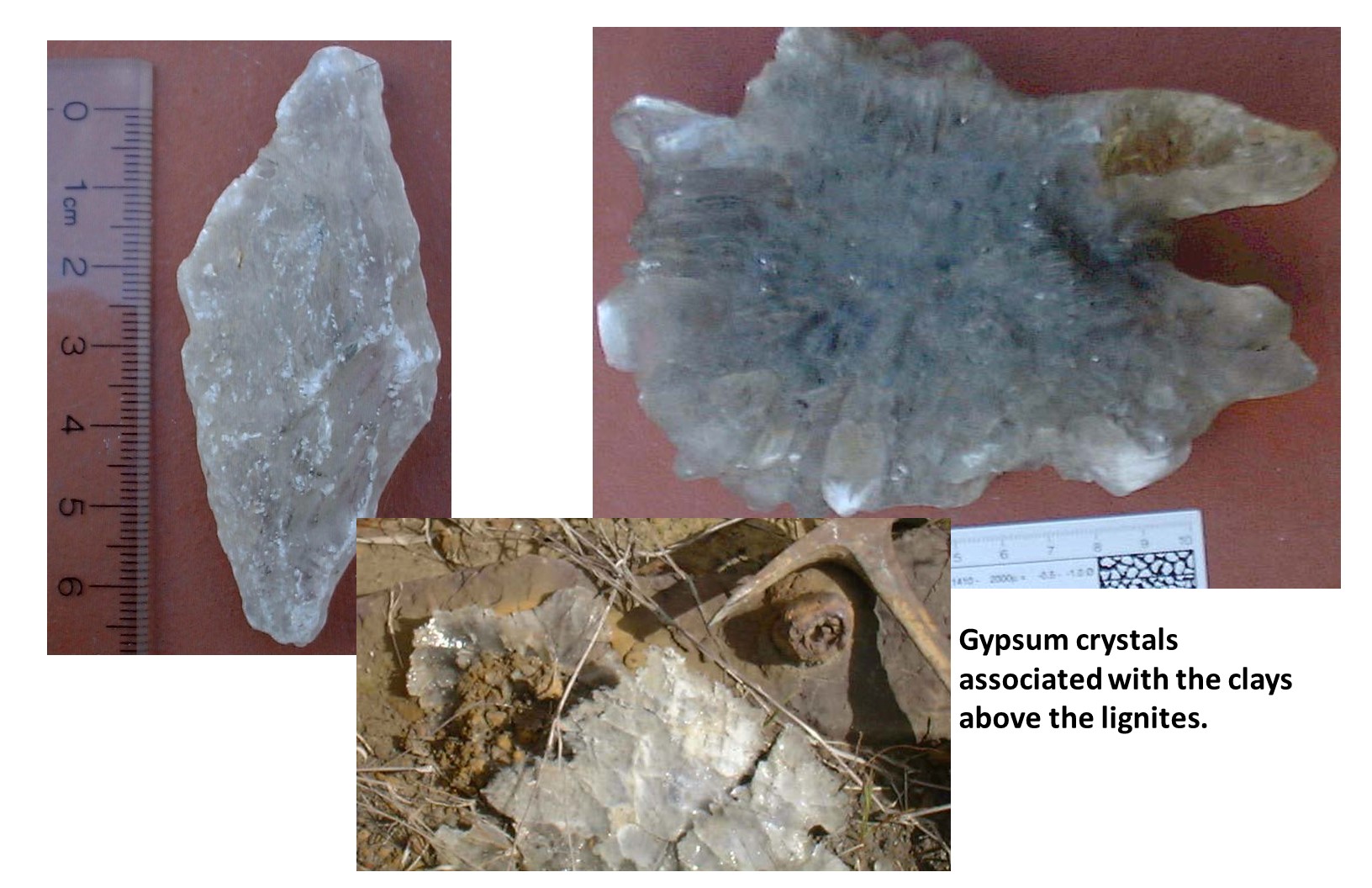 A series of sandy beds with abundant small Ophiomorpha of varying orientations. The wedge shaped bed is being eroded by the upper bed (channelisation). Iron stained sands also dominate the interval.

photomontage of a composite stratigraphic section of the two uppermost sequences 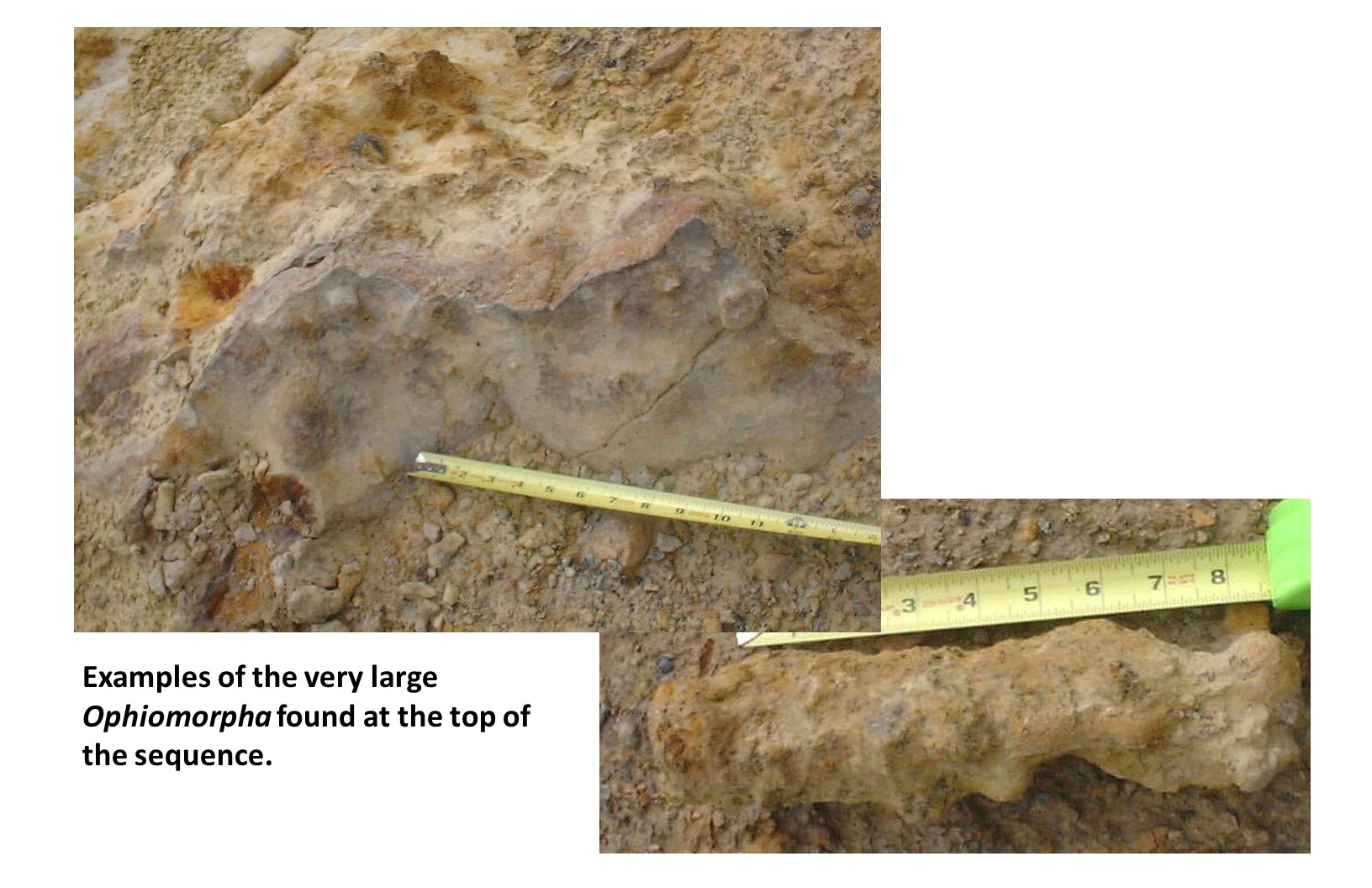 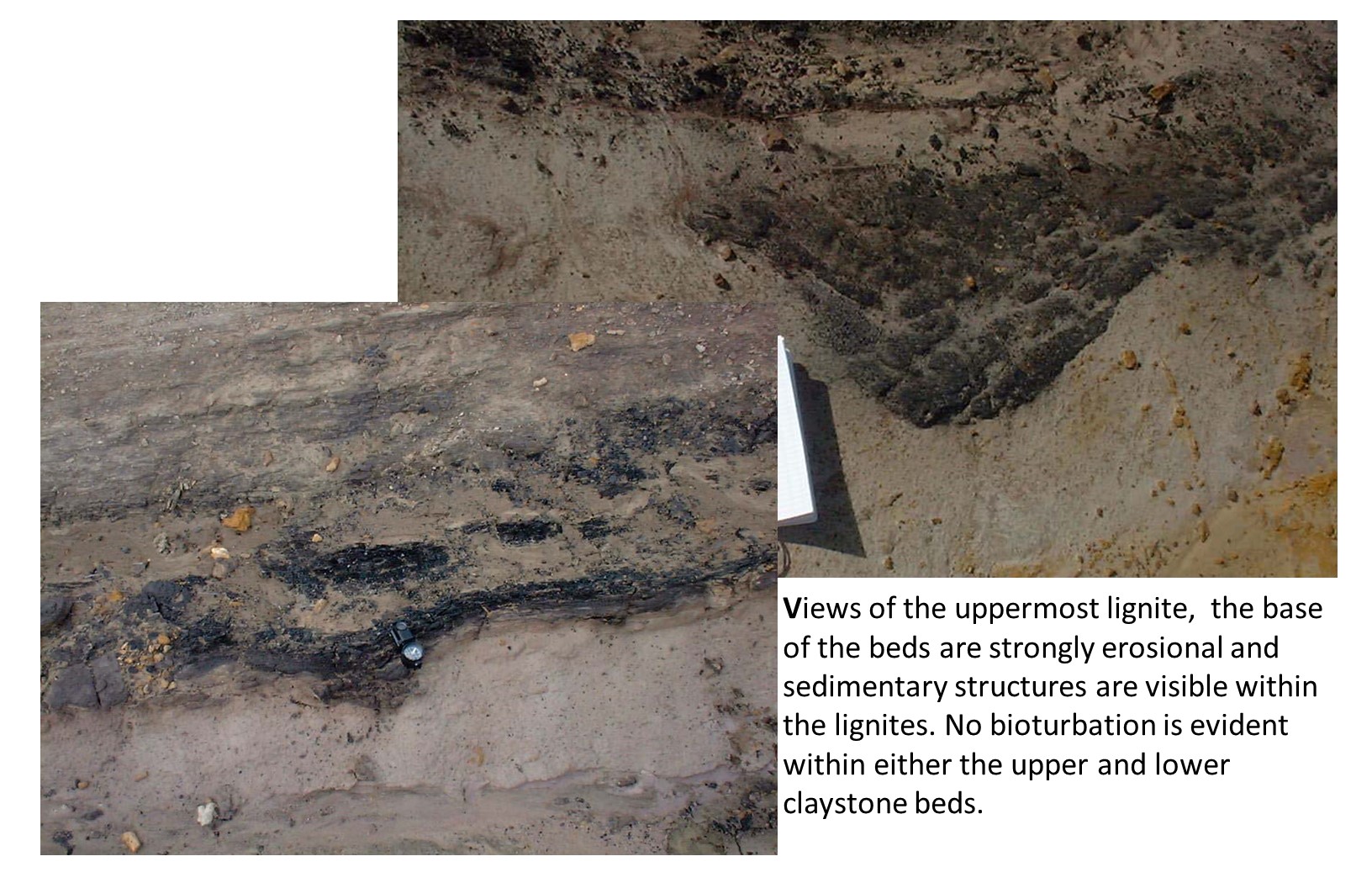 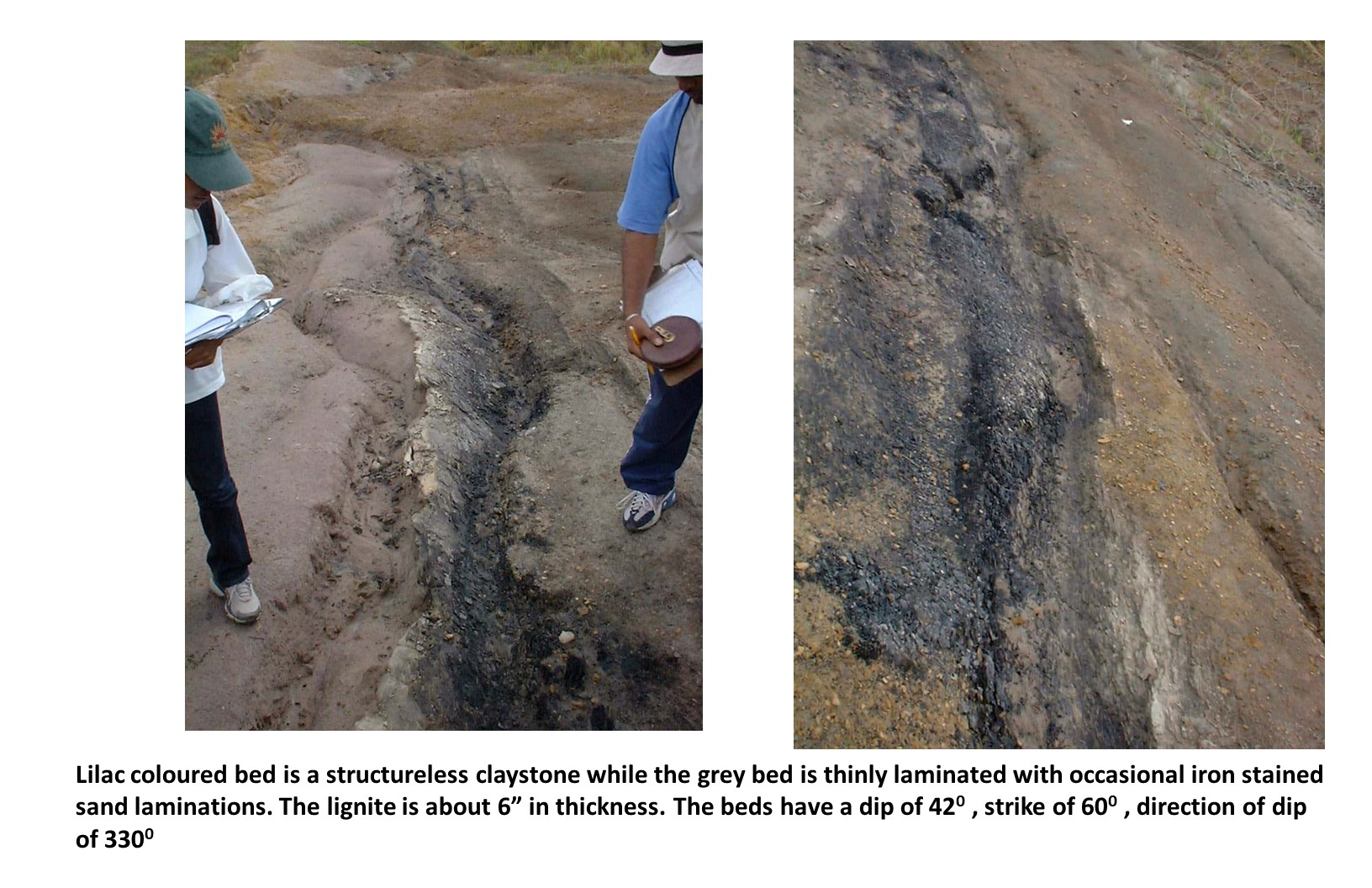