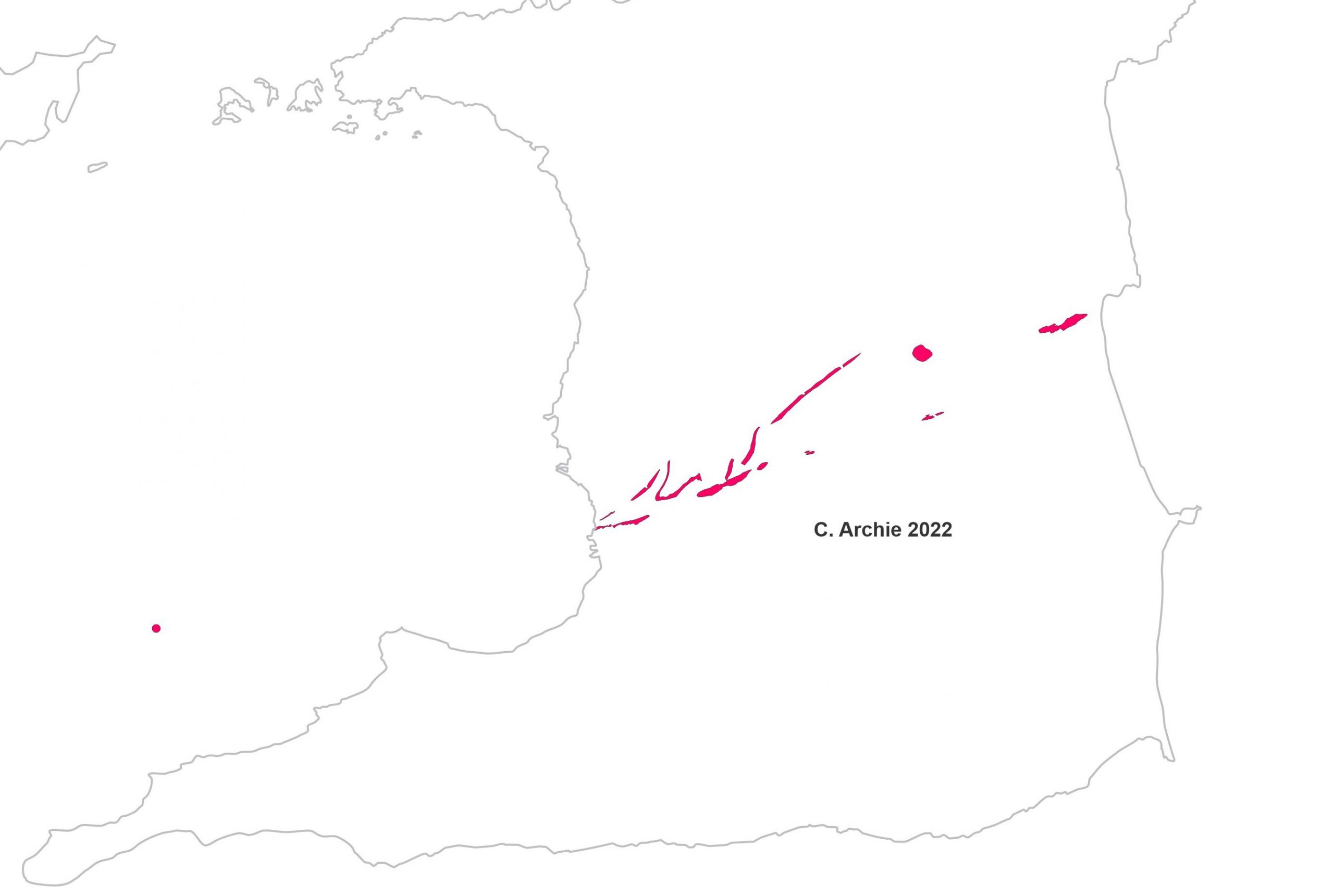 Authors of name: WALL (G. P.) & SAWKINS (J. G.) (1860). Report on the geology of Trinidad, p. 39.
Type locality: Tamana Hill, eastern Central Range.
Thickness: About 300 feet.
The Tamana Calcareous Series of WALL & SAWKINS consists essentially of the massive limestone of Tarnana, l’Ebranche and Montserrat, varies from white to yellow in colour and from granular to crystalline, in texture. WALL & SAWKINS also include in this Series sands and clays belonging to the present-day Manzanilla and Brasso formations. It was, therefore, necessary to confine the term Tamana to the limestone and intercalated calcareous sands and clays only. In this sense the Tamana for¬mation at the type locality represents a thickness of about 300 ft. of essentially impure limestone and silty marls resting on Brasso formation.
MAURY (1925) lists a few molluscs from her Tamana horizon which she erroneously places at the base of the Trinidad Miocene.
The Guaracara, Biche and Brigand Hill limestones (WARING, 1926, p. 56) are included in the Tamana formation (KUGLER, 1936, p. 1451).
VAUGHAN & HOFFMEISTER (1926) describe seven species of corals of which the genus Orbicella was already reported by WALL & SAWKINS. Amongst the larger foraminifera VAUGHAN & COLE (1941) mention Planorbulinella and Amphisorus, while SUTER (1951) reports Operculinoides tuxpanensis. Two species of calcareous algae are described by HOWE (1922) and three Cypraeacea by SCHILDER (1939), all of Miocene age.
Limestones of approximately the same age are known from Hispaniola, Cuba and Venezuela.
(H. G. KUGLER).

Throughout the Central and Southern Ranges occur a number of limestone reefs, some of them in tectonically disrupted position; all are essentially algal bioherms of variable sizes and up to 300 ft. in thickness.

The rocks are grey, yellow and white, cavernous and vugular and partly massive, partly bedded, with clay and marl intercalations. In age they appear to be restricted to the Lower and Middle Miocene. Apparently, reef al conditions were established earlier in the Southern than in the Central Range.

The reefs are clearly bound to uplift zones. Younger sediments are not found in the Central Range indicating its positive structural nature. Marine clays, silts and glauconitic sands of Upper Miocene and Younger Age outcrop on the northern flanks suggesting that although the Central Range may not have been fully emergent during this time, nontheless it formed an effective barrier isolating Upper Miocene to Pleistocene deposition in the Northern and Southern Basins. 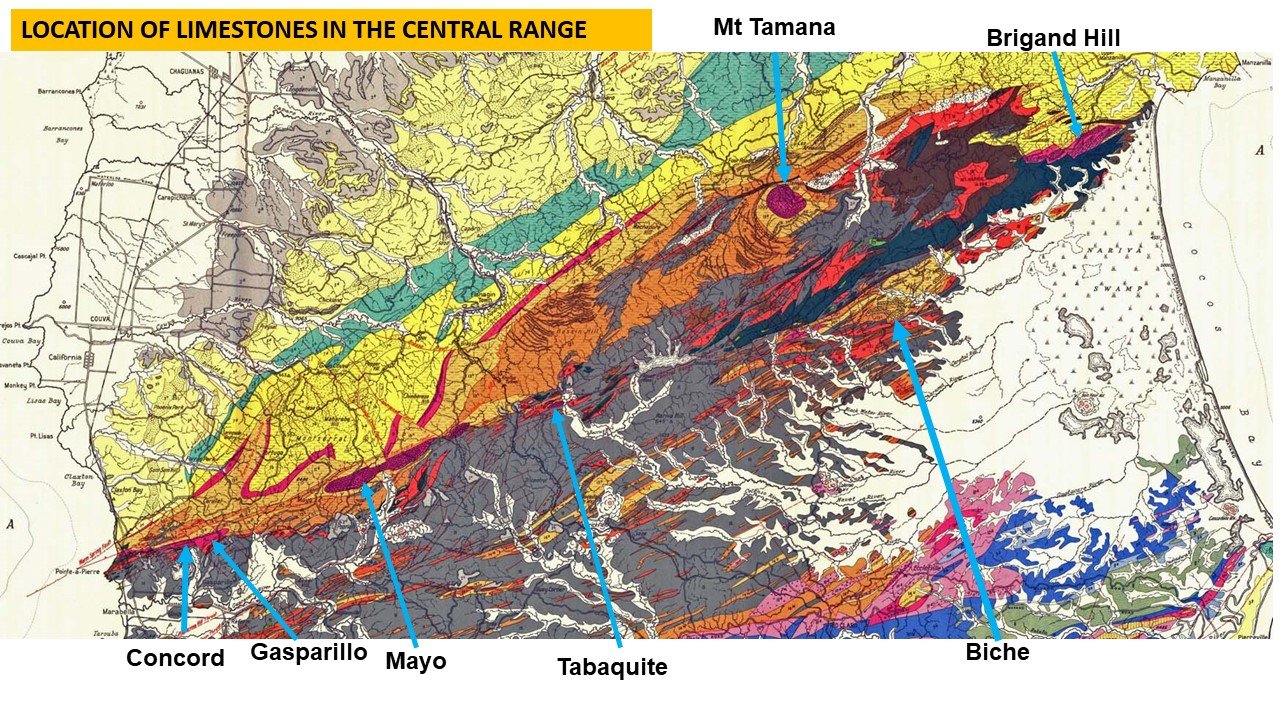 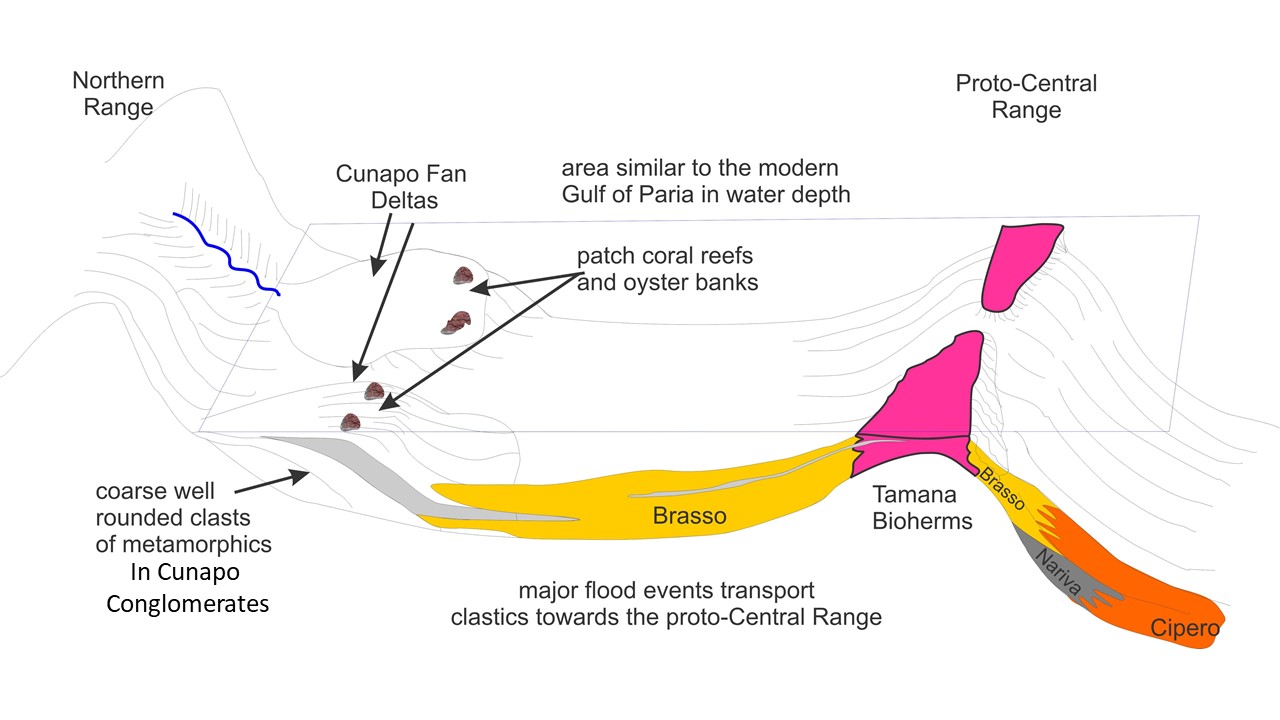